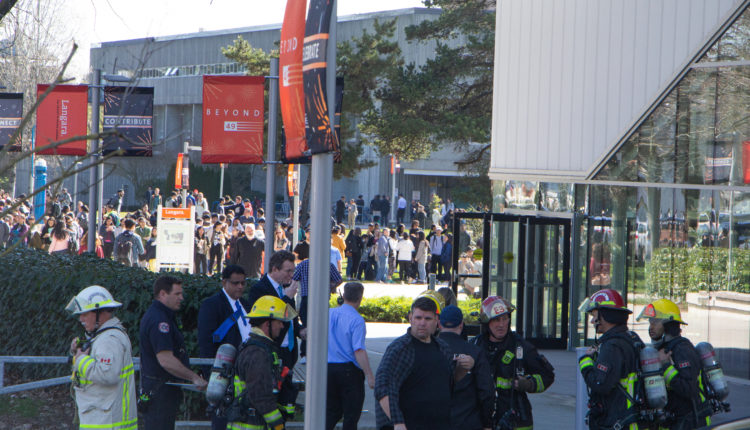 Nasradin Abdusamad Ali has been charged with one count of arson in relation to inhabited property, and one count of possession of incendiary material in connection with alleged arson and suspicious devices found on Langara College’s campus Monday.

A man with the same name and birth date was charged in January of 2018 with one count of uttering threats and one count of theft under $5000. Those charges were stayed.

Following a complete evacuation of campus Monday morning in response to at least two fires, specialists from the explosive disposal unit of the Vancouver Police Department thoroughly searched the campus and discovered a number of devices over the course of the afternoon.

“At least a couple of these devices did go on fire, so they were capable of doing damage,” said VPD media spokesperson Const. Jason Doucette. “Some [devices] were lit on fire, some did go off, some didn’t, and we’ve made those safe at this point.”

Doucette said the man was arrested by Metro Vancouver Transit Police just after 4 p.m. and handed over to the VPD. He said he couldn’t confirm whether the suspect is a Langara student, but they’re not looking for any other suspects at this time.

Their investigation is ongoing.

Just after 11:30 a.m., two separate fires were allegedly set on the second and fifth floors of the Science and Technology Building. The alarms and some sprinklers were set off and thousands of students exited the building, some in the middle of writing exams.

Students, staff and faculty gathered outside the building in confusion for over an hour as units from the Vancouver fire and police departments arrived on scene.

Chemistry teacher Nathan Jones said he noticed the fire after seeing the flames’ reflection coming off the whiteboard.

“All of a sudden the whiteboard glowed orange, I could feel the heat on my back and I turned around and there was a massive fireball in the hallway,” said Jones.

His classroom was on the fifth floor. He immediately evacuated his students down the stairwell where they saw another fire burning on the second floor.

The smell of gasoline

Several students and faculty told The Voice they heard other people witnessed a man carrying gasoline canisters go up to the fifth floor and set the hallway on fire.

“I saw the fire. I was like five metres away from it,” said one faculty member who did not want to be named by The Voice. Some faculty said they were instructed not to talk about the events, as they were not authorized to speak of the incident. “You don’t get a fire like that without any cause. It just doesn’t happen, especially in the middle of a hallway.”

Students that had been in the building said they could distinctly smell gasoline.

“When we got down to the first floor it smelt really strong” said Langara student Sameeha Wadhwania.

One student said the fire interrupted his exam on the fifth floor.

“My classroom was right [across] from the offices, so the fire was in between the classroom and the offices, it was pretty scary to be honest,” said Marcus Ng, a second-year chemistry student.  “There was some kind of gasoline smell.”

Rajan Kalia, a second-year general sciences student, said after hearing the alarm sound, he raced down the internal stairwell of T Building where he saw the second-floor hallway filled with smoke.

“The sprinklers were going off and there was a really light smell of gasoline,” he said.

Second-year associate of science student, Huyn Li, said after someone yelled “fire” she initially thought it was a joke.  Then she smelt smoke.

“Everyone was panicking and running down the staircase,” she said.

Campus closed for the rest of the day

Police were telling students if they saw anyone suspicious on campus to immediately notify the officers or call VPD.

Soon after students were instructed to leave the T Building, heavily armed VPD units began evacuating and cordoning off the campus with yellow police tape.

Shortly after, the other buildings on campus were evacuated so police could conduct a security sweep.

In an email announcement made by Langara College, all staff and students were advised that campus was closed for the rest of the day. All regular and continuing studies classes and exams at the West 49th campus were cancelled.

The college also asked for anyone who saw anything suspicious in the T Building on Monday morning to call 911.

After five years of playing varsity soccer, one player plans to coach

UPDATE: Arson attack on Langara College was planned and deliberate