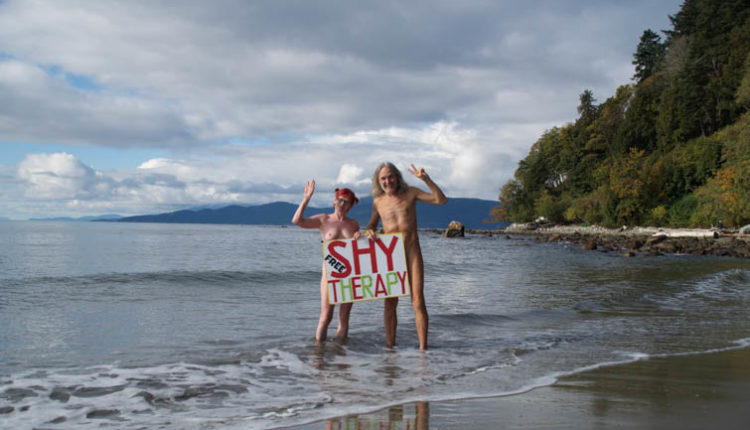 Getting naked will end war and male domination, according to nudist playwright Korky Day. Day’s production, Shy Therapy at a Nude Beach, aims to accelerate emancipatory nude politics and cure Vancouver of “clothaholism,” the addiction of wearing clothing.

Day said the play, based on the therapy he offers to non-nudists on Wreck Beach, invites textiles, people who wear clothes, to explore psychology, the way they were raised, and the politics of living in this patriarchy. After analyzing their timidity, attendees can choose to undress and receive a bare bum certificate.

Co-star Christina Lake, a recent convert to nudism, hopes the play will cure others of clothaholism. While social isolation exists in Vancouver, “the [social] barriers can come down if a person gets a little bit into nudism and realizes that these barriers are useless,” Lake said.

Combining publicity with protest, Lake now roams Vancouver with her breasts exposed, handing out leaflets for the play.

“The maniac idea of covering up your whole body, especially for religious purposes is something that is worthy of protest as far as I’m concerned,” Lake said. “Korky helped me and I have found my vehicle to protest this now. I can show my breasts in public.”

Day’s political brand of nudism, sometimes referred to as naturism, does not please everyone. Though the play is based on the beach, it is not endorsed by the Wreck Beach Preservation Society. Chairperson of the society, Judy Williams said the production “in no way represents the beach and naturism.”

According to Day, society members were uncomfortable with critique of religious coverings. Day does not view nudists as anti-religious,

Shy Therapy at a Nude Beach runs from Oct. 18-29 at Fairview Hall.

LGBTQ+ community being represented in TV and movies culture

Students are choosing being single over relationships