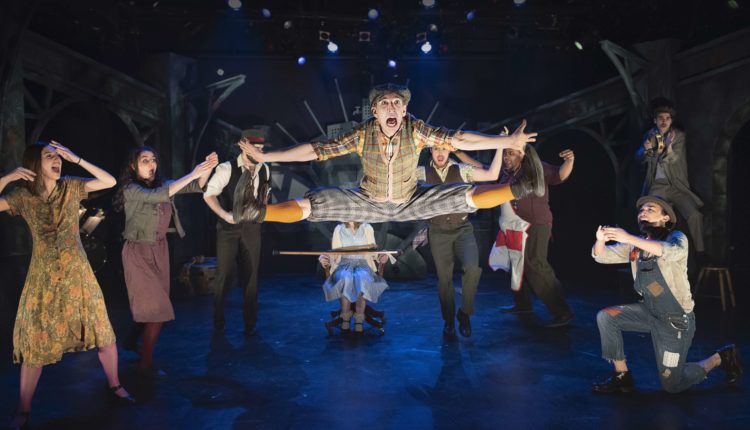 Urinetown takes piss out of life

Using satire, Urinetown is a commentary on how the wealthy abuse their power over the disenfranchised. Director Courtenay Dobbie said the play’s themes are all explored through humour.

“Urinetown asks us to laugh in the face of our human-caused self-destruction,” Dobbie said. “But also to question authority and power.”

The play centers around a group of impoverished people who are outraged at the greed of the corporation, Urine Good Company or UGC for short. The company controls the toilets used by the people amid a water shortage, prompting the group to rebel.

The play’s messages are obvious and hit home in a world where conservation is at the forefront of the public consciousness.

But it never gets too serious, according to Studio 58 actor Liam Stewart-Kanigan who plays Officer Lockstock.

“It’s such an absurd concept it’s like how can you be offended?”

Dobbie said the production wasn’t seeking simple answers and she wants the audience to be both entertained and informed.

“It doesn’t provide any easy solutions and acknowledges the grey areas between what’s right and wrong,” she said. “Once the laughter subsides the audience has a chance to reflect on how the themes presented are relevant to their own lives.”

Audience member Paterson How, who watched the play, said the satirical nature worked.

“There are important things to consider and laying them out through comedy is a really good way to do it,” How said.

Dobbie said the musical’s themes are even more relevant now than they were 20 years ago, given the current state of the world.

“It’s unfortunate that in some ways we are only just now waking up to a lot of what the play warns about.”

Urinetown, The Musical runs until Feb. 16.