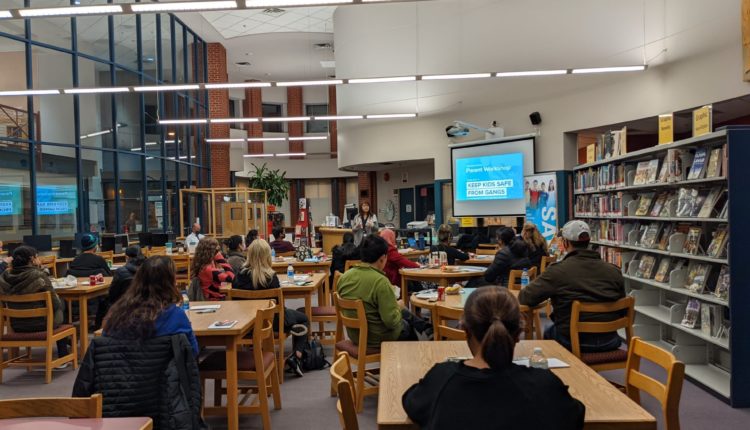 An anti-gang workshop at a Guildford school. Photo courtesy of Simran Sidhu.

Surrey reaches out to parents as a gang-prevention tactic

The City of Surrey is taking a new approach to keep children out of gangs by trying to help families become stronger.

Research by a municipal program funded by Public Safety Canada found that Surrey children with a lack of connection to their parents were the most at risk for joining a gang.

Harmeet Shergill, Surrey’s community safety coordinator, said that during focus groups, conducted by Surrey Anti-Gang Family Empowerment, young people spoke about their inability to have hard conversations with their parents.

“When we asked these kiddos why they felt like they can’t have these conversations with their parents, a lot of them said they feared their parents would judge them or compare them with other children,” she said.

That discovery led Surrey to put together a series of workshops this fall to help parents work with their children to prevent gang activity. There have been six workshops so far, most running this week at a handful of Surrey schools, exploring how parents with children of all ages can build stronger communication. Each workshop is being held in a major section of Surrey.

Surrey has a young population, with the largest school district in B.C. A 2017 municipal report found that teenagers with driver’s licences are frequently targeted by gangs. According to stats for 2014 to 2016 from the Surrey RCMP, the average age when a gang-member committed their first criminal offense is 16 years old.

Shergill said the sessions are a chance to let parents tell their own stories and open up conversations about topics parents struggle “to talk to their kids about.”

Jon Ross, the supervisor of Surrey’s Wraparound program that works with parents and caregivers to help teens at risk, says that when it comes to keeping youth away from gangs, focusing only on teenagers is not enough.

“Looking at that whole family system is crucial to make long-lasting change in a young person’s life,” he said.

Ross said there could be a number of reasons why parents have a poor connection with their children. They may be single parents without support or going through mental health struggles. His program sees parents who are socially isolated.

“They have their own hardships they had growing up,” he said.

The workshops also featured information about gangs and warning signs for parents from the Combined Forces Special Enforcement of BC, a provincial anti-gang agency. Sgt. Lindsey Houghton of the unit said that B.C.’s geographical location is connected to its gang activity. “Our location in the Pacific Northwest and our closeness to the U.S. border, our position as a gateway to Asia. Those kinds of things definitely play a role,” he said.

Shergill said session organizers have tried to reach parents in culturally relevant ways. “One of our sessions was in Punjabi and we had, I believe, over 30 parents attend.”

The feedback from the first four workshops has been positive, Shergill said.

“We haven’t seen a lot of workshops that’s a little bit more interactive,” she said. “So, we did try to do something that was a little bit different.”