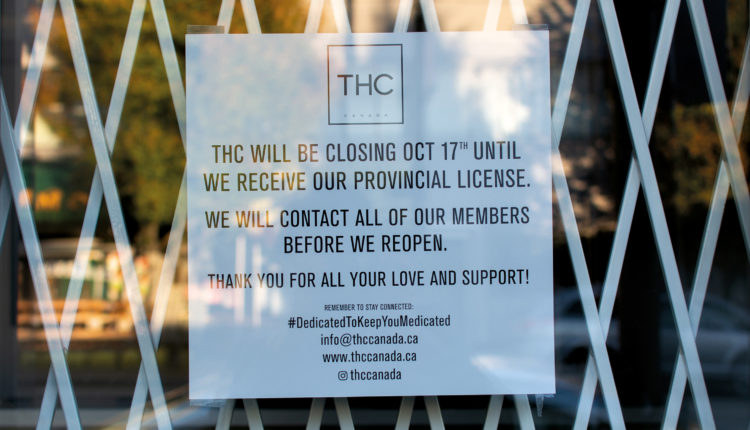 A sign on the door of a cannabis retailer in South Vancouver says they will be closing their doors while they wait for provincial and municipal licences. Photo by: Nick Laba

On the day Canadian cannabis became legal, many in the budding industry were out of work.

All 20 city-sanctioned pot shops in South Vancouver would have to close their doors Oct.17—even the four previously issued municipal business licences.

“It’s definitely something that’s stressed out budtenders all across the city,” said Nick Naresh, a manager at THC Canada, a licensed store in South Vancouver. All eight full-time employees will have to find other ways to make ends meet, despite the incoming cash crop.

The irony of the store closing on legalization day presents a real-life problem for Naresh, who depends on the income. After working steadily at THC for three years, he said he’ll likely apply for EI.

Vancouver’s approach to illegal retailers has been historically lax.

But Public Safety Minister Mike Farnworth wrote a widely publicized op-ed where he promised a crackdown come legalization day. Provincial inspectors can now seize product and records without a warrant.

Businesses that applied to operate legally must wait to be issued a new provincial retail licence before applying for a municipal business licence to operate a cannabis retail store. No official has said how long this process will take.

Todd Richardson, who works at another licenced store wasn’t concerned. “We’ve already applied for our new licence so it shouldn’t take too long,” he said.

Not all stores are waiting for the green light. An employee at WEEDS on Main Street said they’ll be staying open past Oct. 17, but declined to comment further. WEEDS is operating without a licence.

City of Vancouver spokesperson Jag Sandhu said only four licence applications from the province have been received.

“[No] cannabis retail outlets will have completed the process to obtain a provincial and municipal licence to operate in Vancouver as of Oct. 17,” he said.

Langara to elect Aboriginal student rep for first time since 2014