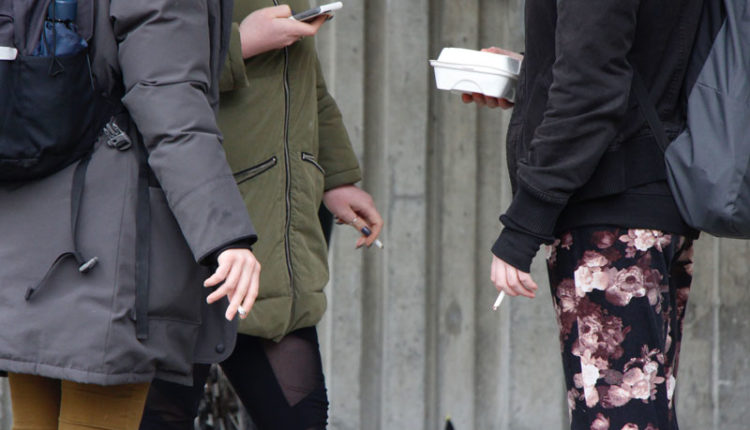 Langara's smoking students may have to take their habits off-campus. Photo: Shoji Whittier

Smokers at Langara are coming under scrutiny from the new Smoke-Free Committee, created to conduct a survey on whether smoking should be banned on campus.

Students and faculty may have to smoke off-campus, depending on the results of the survey.

The committee, created by Langara’s Wellness Promotion Committee, is offering the survey online from February 27 to March 10. Right now, Langara is the only post-secondary institution in B.C. to not have a campus-wide smoking ban. Smoking is currently prohibited in buildings, around doors, and near air intakes, but smoking is allowed anywhere else on campus grounds.

“I think it’s high time that we should have a campus-wide ban; I’m mildly surprised we didn’t have one,” said Garyen Chong, a department of health sciences instructor. Chong said he believes if the survey results recommend a smoking ban, it would probably be made into a reality.

“[If the committee] would have advocated for [a] no smoking ban campus-wide, I am absolutely sure that administration would be very receptive.” Chong said.

“I mean, you don’t want to bully people around, but they could just walk farther from the school and smoke, I don’t think it’s too much of a hassle.” Katanas said

Other students, like film arts student Tyler Gilbert, think designated smoking areas would be better than a total ban.

“I can’t speak for all of them, but I think most smokers don’t have an issue with being regulated to certain areas.” Gilbert said.

Regardless of what the survey finds, Gilbert says he believes people will still smoke at Langara.

“I think that there are going to be people smoking despite whatever restrictions you put in place.” Gilbert said; “[If] you restrict smoking altogether over such a wide area as this, it’s still going to happen.”

Voice Podcast 11: Survey aims to snuff out smoking at Langara