With limited space in senior care facilities, elderly people who decide to stay in their homes are confronted by additional costs to make their homes accessible.

When preparing a home to be accessible for seniors, the necessary equipment and adjustments can cost thousands of dollars, according to Louise Cooper, a former caregiver whose aunt is currently “aging in place.”

“There are lots of little costs that people don’t think of,” Cooper said.

“Our health care system assumes you have relatives who will take care of you.”

Cooper said more needs to be done to ensure Canada’s aging population is adequately cared for.

“Our system is not set up to deal with the [current] amount of seniors,” Cooper said. “We are not building enough facilities at all.” 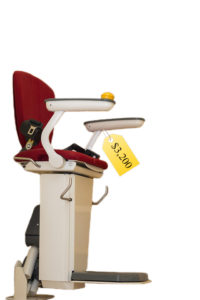 According to Kim Lepp, owner of Home Instead Senior Care, aging in place may become the only choice for many seniors living in Vancouver since there are so few seniors’ residencies with availability in the city.

“There’s waiting lists, so if [seniors] get to a point where they have to move, that’s really difficult,” Lepp said.

“And it’s not going to get any better, because we’re just at the start of this whole Baby Boomer thing.”

For a senior planning on aging in their home, some basic purchases include mobility equipment, shower benches, raised toilet seats, a life-alert system and “Meals on Wheels” services. For seniors requiring live-in care, the cost can be upwards of $30,000 a year, according to Isobel Mackenzie, a B.C. Seniors Advocate.

“Most people express the desire to live in their home for as long as possible,” Mackenzie said.

“Some people see it’s no longer possible when they… run out of money to bring in the help.”

Lepp said she is worried that many seniors won’t have options for housing as B.C.’s aging population grows.

“Houses are getting knocked down,” Lepp said.

“So seniors are selling them and relocating, or they stay in their home, but the neighbourhood is actually changing.”

Panic buyers should rethink over their shopping list, experts say

The Voice newspaper and its digital edition, the Voice Online, are produced by Langara College journalism students as part of their multimedia production courses.

Are you interested in studying Journalism? Want to write for the Voice?  Langara.ca/journalism