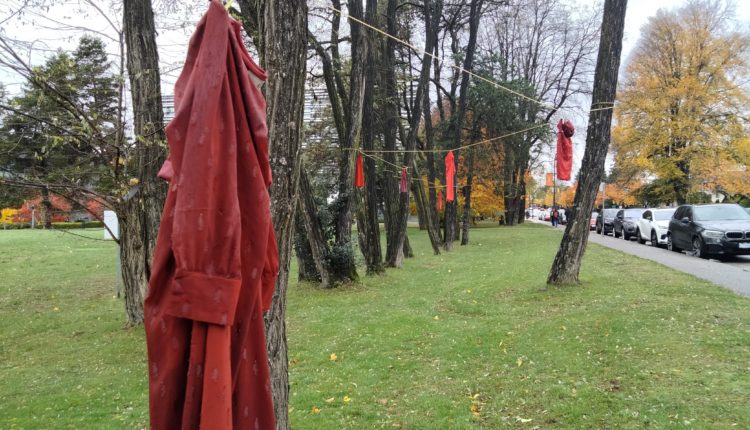 Red dresses, strung in the trees around Langara’s campus to remember missing and murdered Indigenous women and girls, were taken down Nov. 2.

Located among the trees along 49th Ave., for the past month they were visible to students arriving to class and drivers commuting to work alike.

Created by artist Jaime Black, the REDress project is an art installation across Canada and the U.S. that began in 2010. According to Jaime Black’s website, the project consists of red dresses hanging to commemorate the loss of more than 1,000 Indigenous women as a result of “the gendered and racialized nature of violent crimes against Aboriginal women,” as stated on the artist’s website.

The red dresses are displayed every October across Canada to honour the Missing and Murdered Indigenous Women and Girls.

A first-year business student, Harjas Batra, said the art installation was “deeply moving.” She said she initially “didn’t know about [the history]” of missing and murdered Indigenous women but learned about it after “seeing the dresses [around campus].”

What has been done

Namely, that the violence against Indigenous women and girls amounted to genocide.

Hardeep Atwal, a second-year nursing student, said that learning about the history behind the art installation made her “very sad.” Despite the tragedy, she’s “glad [the school] did commemorate [MMIWG].”

The Voice reached out to Langara’s Office of Indigenous Education and Services but the department was unable to comment by the publication’s one-week deadline.

High rates of academic misconduct may be due to stress

Studio 58 returns to the stage with ‘Everybody’