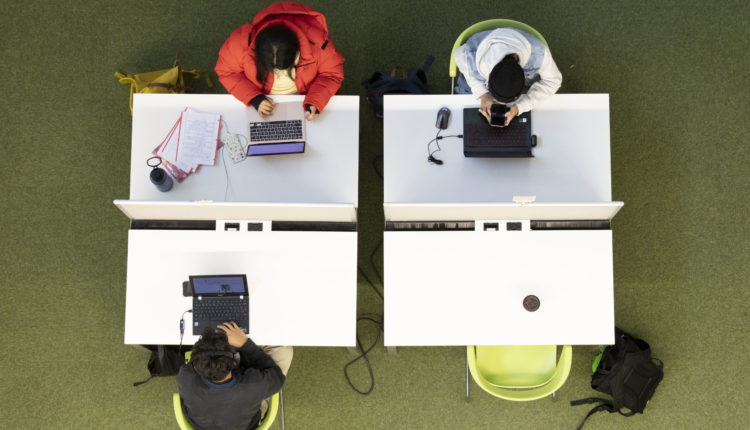 Students studying on their laptops in the library on campus. Photo by Lauren Vanderdeen

High rates of academic misconduct may be due to stress

This story has been updated to include comments from Langara student Jerica Yoon and instructor Chris Schmidt.

Stress and difficulty adjusting to the return to campus may explain the high level of cheating among students that has continued at Langara College since the COVID-19 pandemic.

Erin Hagen, a student conduct officer at Langara said last year’s rise in academic misconduct cases at Langara was extensive. She said there was about a 30 to 40 per cent increase across the college.

That number has not gone down since students returned to in-person classes on campus.

“Numbers are pretty high still, like pretty similarly high to what they were last year,” Hagen said.

At post-secondary schools all over the world, cases of cheating, plagiarism, unacceptable collaboration and other forms of academic misconduct rose drastically during the pandemic. But Langara is doing better than most schools.

Sarah Elaine Eaton, an associate professor at the University of Calgary who researches academic integrity, isn’t surprised by the high numbers.

“To be honest, if you’ve had a 30 to 40 per cent increase, compared with what I’ve heard globally, that’s nothing,” she said.

Hagen offered two explanations for the high numbers. She said more instructors might be aware of Langara’s student conduct and academic integrity office, so they are reporting more incidents. She also suggested students had learned bad behaviours during the pandemic that are continuing now.

“The pressures with the pandemic for many people were insurmountable, so we saw an increase in misconducts,” said Gianacopoulos.

Jerica Yoon, a recreation management student at Langara, said it made sense that cheating became more common during the pandemic, but she said Langara has done a good job of making resources available to students. Two of her classes included a mandatory module on avoiding plagiarism.

“If I found someone cheating, I wouldn’t think it’s because Langara didn’t teach students or didn’t provide enough support,” Yoon said. She added that with all the information given to students, it would be wrong for them to cheat.

Chris Schmidt, a computer science instructor at Langara, agreed. “[Students] have some responsibility to know the basic expectations here.”

Schmidt sees a common theme throughout the plagiarism cases he reports. “The higher stress a student is under the more likely they are to have issues,” he said.

When it comes to dealing with students’ academic misconduct, some Langara faculties said empathy is important.

Gianacopoulos believes that the misconducts aren’t always intentional. She said many students feel they do not have the help they need. She noted that students have other stressors and challenges in life other than school, and it is OK to ask for help.

“Coming to [students] with compassion would be such a huge, beneficial change for them,” Gianacopoulos said. 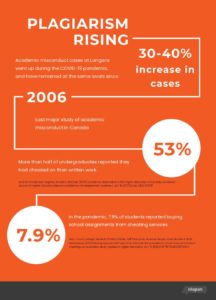