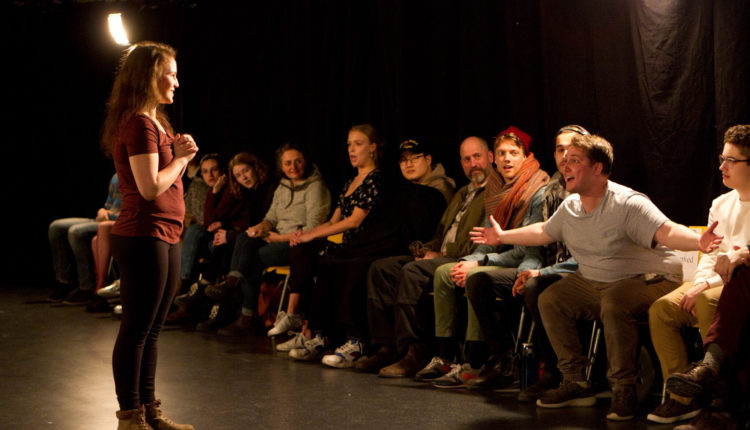 Langara College’s Studio 58 is addressing what it means to be the first generation to grow up with easily accessible pornography.

As part of the Risky Night Series and in collaboration with Neworld Theatre, Langara College’s fourth-term Studio 58 students are putting together an acting workshop called The P*rn Project from March 19-25.

Common theatre traditions are tossed aside as the actors are on-stage throughout the entire performance. The students have written their own scripts that draw from their own personal experiences to discuss the effects of pornography.

Director Chelsea Haberlin said the motivation for this project came from her co-director Marcus Youssef, who wondered what it meant to grow up with readily accessible pornography through the internet.

“[Youssef] realized that it was a topic he couldn’t delve into himself because he’s GenX,” Haberlin said. “He grew up with what most of us grew up with in my generation which is like … you sneak someone’s magazine; you hide it in the woods and you look at it with your friends.”

No evidence of gateway to sexual violence

Sexuality and relationships educator Nicky Waring said there are misconceptions about pornography being a gateway to sexual violence, but that there is no evidence of this in research.

Waring said that more discussion about pornography is necessary as technology continues to make pornography more accessible. She said this will help the growing generations to view pornography in an educated and critical way.

IMPACTS, is a seven-year project that is comprised of researchers from Canadian post-secondary institutions. They are observing and documenting The P*rn Project to gain further knowledge on youth’s attitudes and their relationships with pornography.

Ruth Beer, co-applicant of the IMPACTS grant, has been working closely with Studio 58 and said they are both interested in learning about the thoughts and questions of university-aged people on pornography, as well as their opinions on sexual assault.

“I’m very fascinated to see how that occurs within the theatre community,” Beer said.

Plagiarism penalties not worth the grade