The Cambie Corridor Plan transforms the face of the neighbourhood

This story has been updated to include comments from Odilia Dys, Cambie Village resident and Rania Hatz, executive director of Cambie Village Business Association.

As new developments are set to go up around Oakridge-Langara, residents are expressing mixed feelings about the neighbourhood’s increasing densification.

“It doesn’t feel the same as it used to,” Johal said. “And the more condos and townhouses that they build, that’s not appealing for families, that’s appealing to single people.”

The Cambie Corridor Plan was proposed by the city as a response to increasing housing demands in Vancouver. The plan envisions a mix of residential and office space along Cambie Street, with the Canada Line running underneath the main artery.

For Oakridge-Langara, which runs from Granville Street to Ontario Street between 41st Avenue and 57th Avenue, the result is a shift away from single family dwellings to condominiums and townhouses.

“It’s good for housing density in the long run, but in the short run, it’s not good for transportation and it definitely is not good for small businesses,” Johal said. “Once they close down, they’re not going to reopen elsewhere.”

Some residents feel a facelift is what the neighbourhood needs.

Andrew MacRitchie, who has lived in the area since 2003, said while developments can be a nuisance to his daily life, they are a welcome decision.

Hassan Sayed, development director of Alabaster Homes, said that a more diverse housing and retail space would complement the neighbourhood.

“Historically in the area, there’s been many single-family homes and it hasn’t been as dense as other areas in the city,” Sayed said. “It’s absolutely needed in an area that’s already very transit focused.”

Sayed said that feedback from residents has been positive 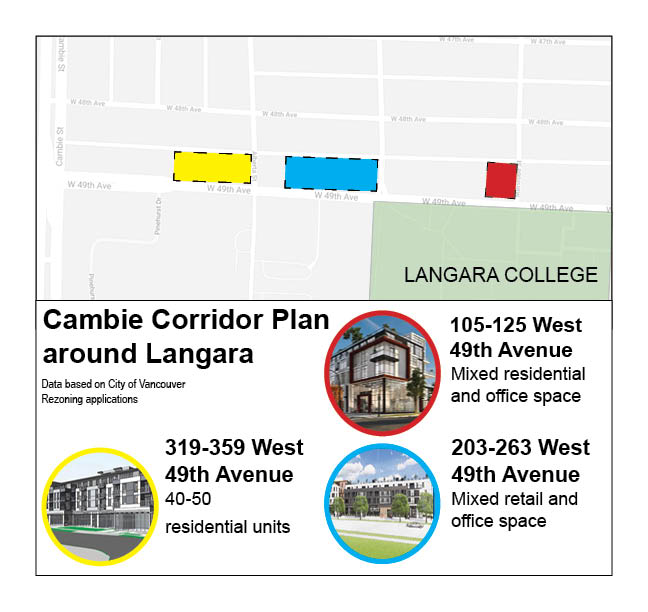 Cambie Village may forecast the future for this neighbourhood

While Oakridge-Langara is in the midst of development, neighbourhoods like Cambie Village offer a glimpse into the future.

Cambie Village, which stretches from West Sixth Avenue to King Edward Avenue, has seen a boom in developments over the last few years.

Odilia Dys, who has a PhD in social psychology and lives in the area, said densified areas can create unexpected social barriers.

Dys said one would think by virtue of living in the same building, there would be more connection, but the opposite is actually true.

“It’s almost like people seek out more privacy when they live in a shared complex,” she said.

Not only can social connection be affected by developments, but affordability has become a concern for residents.

“Having your neighbourhood upheaved for construction definitely creates a lot of angst and stress,” Hatz said, adding once the Canada Line project was completed, for example, people embraced it. “It’s a great place with a lot of diversity and a tight-knit community at the same time.”

Watch the video above to hear long-time resident Rob Johal detail the changes he’s seen in the area.

Langara not the only campus with COVID-19 cafeteria concerns