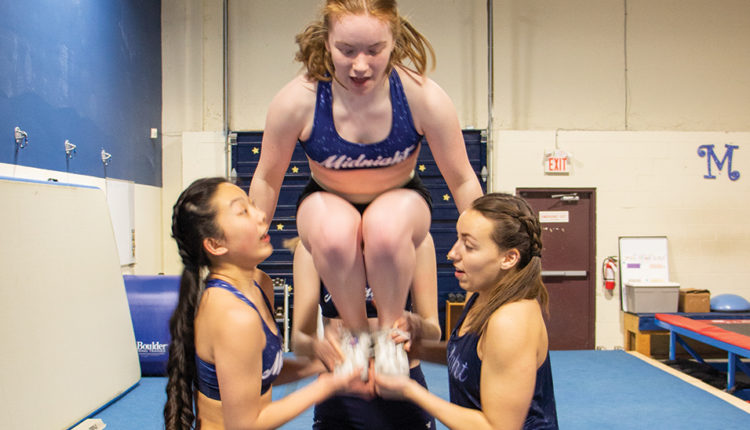 Not just an activity on the sidelines

Competitive cheerleading has emerged as its own sport with international recognition, yet some still view it as an activity that is supplementary to other sports.

The main challenge in making cheerleading its own entity in sports requires convincing industry leaders to take it seriously, said one coach.

Karen Fraser, a cheerleading coach, said this was one of her biggest struggles when establishing her competitive cheer company, Midnight Cheer, in 2006.

“When I wanted to open my own business, it was hard because people didn’t look at cheerleading as a sport,” Fraser said.

The team, based in South Vancouver, recently competed at the Aloha Spirit Championships in Phoenix, Arizona, after training for weeks.

At the championships there were 12 competitive cheer companies from all around North America, each with multiple teams competing at various levels.

Fraser was introduced to cheerleading when she began cheering for her high school cheer squad in Ontario. After moving to Vancouver, she cheered for the BC Lions and founded Midnight Cheer. Fraser said people still see it as a halftime show for football. She said people don’t see the athletics and hard work involved.

“You have to maintain a certain level of physical fitness in order to do tumbling and stunts,” Fraser said.

Keri Lewis, media relations for the B.C. Cheerleading Association, said the challenge for competitive cheer is still the societal perception that cheer is not a serious sport.

“The B.C. Cheerleading Association works very hard to educate the general public on what cheerleading actually is,” Lewis said.

She also said the physical practice of cheer has changed too.

Midnight Cheer has three practices per week and most team members are high school students. Grade 12 student Sasha Predojevic, a base for Midnight Cheer, said the athletics involved in cheerleading is something people should notice.

“It’s hard, tiring work. We train a lot. We do a lot of cardio and strength training,” Predojevic said.