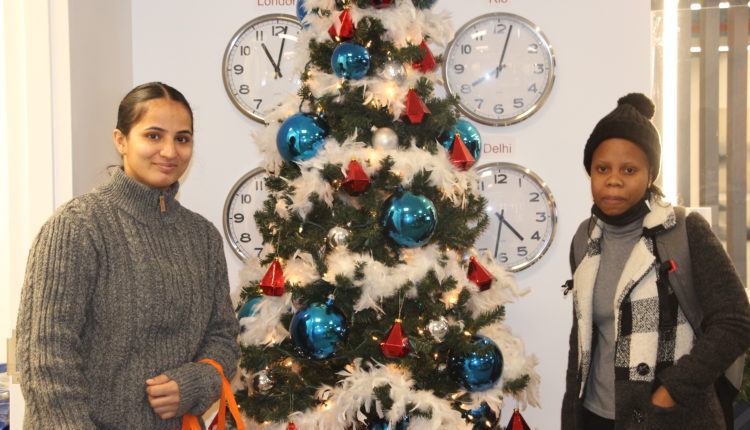 International students Harpreet Kaur and Patricia Gaza (L-R) arrived in Canada a couple months ago and are unable to go back home for Christmas. Photo:Manav Arora

Holiday plans of some Langara international students have been put on hold after travel restrictions were imposed in Canada with the discovery of the Omicron variant of COVID-19 in southern Africa.

Patricia Gaza, who moved from Zimbabwe to attend Langara four months ago, said the new restrictions will prevent her from seeing her husband who lives in Zimbabwe.

The restrictions prevent anyone in Zimbabwe from travelling to Canada and will stop Gaza from going home for Christmas, as she would not be allowed to return to Canada to attend Langara in the new year.

“We had applied for a visa for my husband to join, but he’s definitely not going tocome anytime soon,” Gaza said. “I’m here alone, I need family, I miss my husband, I literally know no one.

“It’s going to be the worst Christmas ever.”

Due to uncertainty about the Omicron variant, Langara international students could get stranded in their home countries if Canada introduces travel restrictions while they are abroad.

Currently, any traveller who is not a Canadian citizen or permanent resident and has visited at least one of seven southern African countries after Nov. 12 will be barred from entry to Canada.

“I’ve seen from a lot of my friends on social media and stuff, there’s a huge public outcry just because it’s getting blamed on us,” said de Villiers. “Our medical professionals in this country are extremely good, so the fact it was found in this country doesn’t mean it originated here.”

People visiting South Africa rushed to leave the country after the announcement of the variant, said de Villiers.

“A friend of mine, she landed from Dubai two days ago and then she had to leave the country again yesterday,” said de Villiers. “So yeah, people are not happy.”

The South African government has not yet imposed any strict travel restrictions or lockdowns on the people of South Africa, added de Villiers. “Our president did announce last night that we’re not going back into lockdown, everything is staying the same and he’s actually urging the countries that have put us on the red list to open their borders again.”

Alym Bhanji, owner of East Africa Wild Adventures, said that while none of his customers were in the affected areas when the variant was announced, his travel agency and its employees will suffer as a result of the travel restrictions.

The company’s ground operators in Southern Africa rely on the tourism industry and their livelihoods will be threatened by the lockdown, said Bhanji.

“Over here, we don’t realize how lucky we have it,” said Bhanji. “Over there, they can’t feed themselves when stuff like this happens, it’s hard to see.”

Bhanji said that South Africans are being punished due to the sequencing of the new variant by scientists at Stellenbosch University.

“The most beautiful continent in the world still stands to get the worst of the world’s wrath,” added Bhanji.

50 seasons and still no Stanley Cup in sight