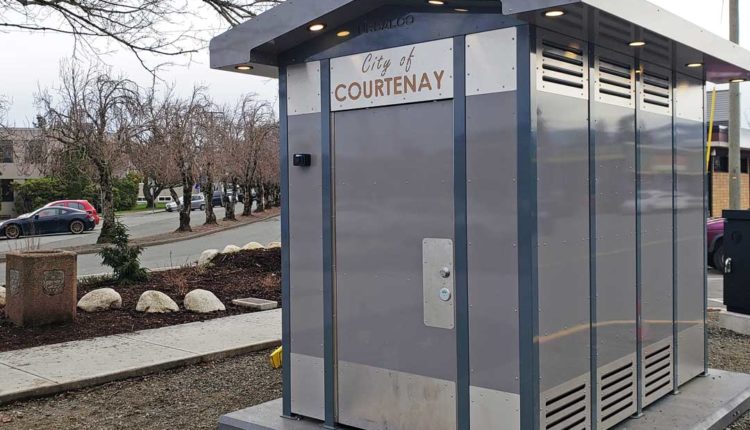 Courtenay's new 24-hour public washroom pilot program will now run till the end of the year.

Much ado over Courtenay’s 24-hour loo

Faced with a growing street population buffeted by the pandemic and climate change, Courtenay’s first public washroom will be available to downtown residents around the clock.

Although concerns had been raised during recent council meetings regarding maintenance and worries about possible drug-related deaths and sexual assault in the “Urbaloo,” city council decided recently that it will be accessible to the public 24 hours a day until Dec. 31. Council also mandated increased cleaning and security checks for the washroom.

The city will monitor the expanded availability until the end of the year. “That’ll be our pilot phase,” Coun. Doug Hillian said.

The Urbaloo was installed in December at the corner of Sixth Street and England Avenue. It is the first public washroom for the Vancouver Island community of 26,000 people. It’s one of many initiatives that the city is trying to put in place while facing a rapidly growing population, including an increase in homeless residents, as British Columbians move out of major metropolitan centres and to smaller, rural towns.

Coun. Wendy Morin said the needs of an expanding population, including an increase in people on the street downtown, was highlighted by the COVID-19 pandemic.

“It is an issue for folks who are unhoused. I mean, COVID was really hard because there was no, there were no places to get water,” Morin said.

Morin says that facilities such as the Urbaloo and the city’s new warming and cooling centres are becoming crucial to the Courtenay community.

In recent years, the city has begun to grapple with climate change and how to accommodate the local population in the face of drastic challenges.

“Even in addition to COVID, we’ve had the climate-related challenges like the heat dome . . . when you don’t have public facilities for people who need them, whether it’s washing your hands or going to the bathroom or for people who are unhoused.”

Business owners downtown hope the Urbaloo will mitigate their concerns over the growing homeless population.

Hillian says that business owners within the downtown sector were concerned that people were using their washrooms for drug usage or that other activities would take place that would be beyond their ability to handle.

“We had one business bathroom that was badly vandalized when somebody had a psychotic episode in there,” said Hillian. “And we also had people using back alleys and business frontages as their place to go to the bathroom.”

Not all downtown businesses are reporting changes in customer traffic as a result of the Urbaloo, but they do see it as a potential benefit.

“If we’re talking about generally street people, we do get a lot hanging around here but not a lot come in and use the washroom,” said Vivian Dickson, a weekend manager of Edible Island Whole Foods Market. “A few did, but now they don’t come in at all because that one is there.”

Hillian says that the city was concerned that if someone were using the Urbaloo for drug purposes and suffered an overdose, that no one would be there to help them.

“You worry about someone having a n overdose in the middle of the night,” Hillian said. “Somebody assaulting somebody else, somebody sleeping in there.”

But the Urbaloo is not meant solely for homeless residents. City councillors say the washroom is for all members of the community.

“A lot of people, like people who work actually, like electricians, or construction, people who are in their cars, and they need to stop or go to the bathroom somewhere,” Morin said. “And they’re not necessarily going in to eat somewhere to use, you know, the restaurant bathroom.”

Hillian is optimistic about the pilot and the Urbaloo’s future.

“I’m very hopeful that we will just affirm that it will be open 24/7 on an ongoing basis,” he said.

Freedom of information not so free in White Rock