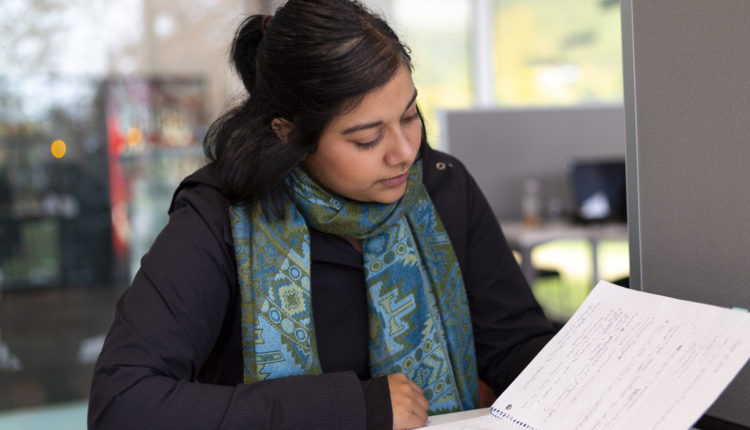 Ishbir Heir, a student in the social service worker program, is retaking a class that she failed after she was found guilty of plagiarism last year. Photo by: Kelsea Franzke

The college recently extended timeline from two to five days but it's still tighter than other colleges.

A student accused of plagiarism says that Langara’s policy to appeal decisions of academic misconduct doesn’t give students enough time to process the news, let alone act on it.

In September of last year, Ishbir Heir’s instructor told her that she had plagiarized an essay.

“I was very distraught and I ended up crying while I was talking to her. When she told me I had two days to appeal I didn’t even know what that meant. I didn’t have enough time,” Heir said.

At Langara the timeline for academic misconduct appeals has now been extended from two business days to five, according to Maggie Ross, director of student conduct and judicial affairs.

The policy change was approved on Oct. 22 and will come into effect within a couple of weeks.

“It’s a reasonable period of time to think about it, consult with others, or ask professors for reconsideration,” said Ross, “It’s appealing a specific point in time, so five days is more than adequate.”

Heir says it’s unfair that students at other colleges are given so much more time to appeal.

“If I had 30 days I would totally be able to appeal my paper and I’d be able to do it comfortably and not worry about only having two days, which is so overwhelming and frustrating,” she said.

“We listen to their story, we’re non-judgemental, to us it doesn’t matter if they cheated,” she said. “We just want to make sure they’re being treated fairly.”

Lougheed said that a few days is not enough time for students.

“It’s a really short amount of time in my opinion because it’s barely enough to even get over the shock of being accused, especially if the student has not actually plagiarized or cheated. It takes a while for a student to have that news sink in and decide what they’re going to do.”

In the following clip Maggie Ross describes the process for appealing decisions of academic misconduct as well as the recent changes to Langara’s policy.