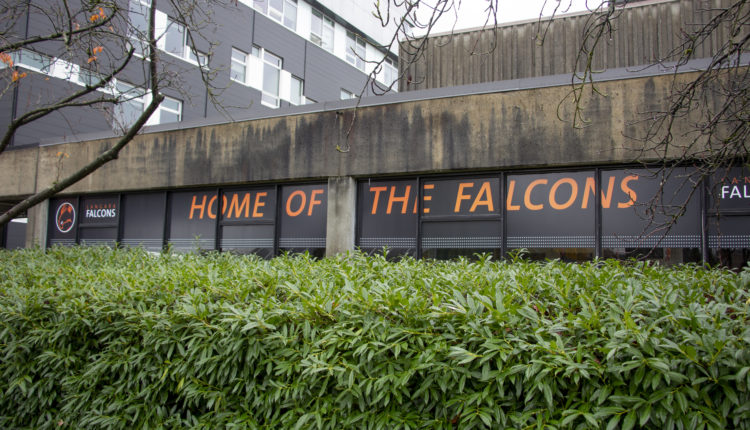 "Home of the Falcons" is painted outside Langara's gymnasium. Photo: Ashley Burgoyne

The department gives students a chance to develop their athletic ability

Seven minutes after trying out for the men’s soccer team at Langara, Athos Michellepis de Siqueira received a text from the coach about joining the team.

The offer included a tour of the school and an opportunity to ask any questions.

The warm response from the coaches was the deciding factor in him choosing to play at Langara over UBC and SFU.

“The thing that made me choose here was also how the… coaches were treating me,” said Michellepis de Siqueira, who is in his second year of kinesiology and playing soccer at Langara after moving from Brazil to Canada.

There are approximately 80 student athletes at Langara who play on men’s and women’s soccer and basketball teams. They are a mix of domestic and international students who say they come to Langara for the support the coaches offer their athletes. The support includes financial help, counselling and growth opportunities they would not receive at a larger school.

Langara’s men’s basketball coach Paul Eberhardt said the small size of the athletics department allows athletes and faculty to get to know each other more closely.

“I think it’s a very welcoming environment for student athletes and particularly for kids coming right out of high school,” said Eberhardt.

He said there are typically two types of athletes that come to Langara to play in the PACWEST league.

Nicholas Chan, a first-year basketball player at Langara, said the people working in Langara’s athletic department are what he values most.

He plans to develop more physically and improve before transferring to a university in a few years and believes Langara will help him achieve this.

He said the department helps to arrange counselling for athletes if they need it.

“We’ve supported them financially. A lot of them are on some type of scholarship from the school,” he said. “We support in terms of making sure that they stay on top of their grades.”

“We encourage international study,” he said. “Players come from all over the world. We’ve got players from Brazil. We have players from Japan. We had players from Malawi.”

Both coaches and athletes said the school needs updated facilities.

“I think one thing that could be very beneficial is some sort of weight room or weight training area,” Chan said.

Eberhardt said Langara has limited space and funding to upgrade.

“It would be sure nice to have a newer, more modern facility,” said Eberhardt. “I think that would help us a lot.”

Watch the video below to hear Nicholas Chan speak about his experience with Langara’s basketball program:

Specialty video stores are surviving the rise of online streaming