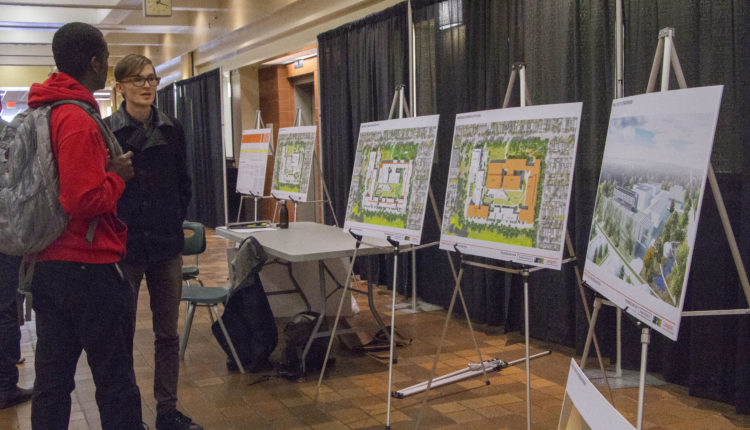 Langara College is proposing a new 25-year master plan to address a space shortage on campus caused by a quickly growing student population.

The City of Vancouver must approve the master plan document before the college can move forward. If approved, the proposal will replace Langara’s existing master plan, and become the framework to shape future growth of the campus.

Wendy Lannard, Langara’s senior facilities consultant, said addressing the shortage of space is the main reason for the proposed plan. The college’s existing master plan identified a full-time equivalent student count of 7,500 by 2030, but Langara’s population has already reached FTE 10,500 students, according to Lannard.

Langara’s existing 25-year master plan was approved by the city in 2005, and included a new library, the Students’ Union Building and Building T.

The proposal was drafted by Proscenium Architecture & Interiors and Teeple Architects, with input from students and faculty in a series of consultation sessions last year. The two architectural firms worked together on the college’s existing master plan.

“Students are really front and centre in everything we’re doing,” said Avery Guthrie, an architectural designer with Teeple Architects. “We’re trying to create a better learning experience, but that’s not just in the classroom. It’s supposed to be everywhere on campus.”

Kelly Sveinson, a chemistry instructor and chair of applied research, works in Building T and said he appreciates that the new plan emphasizes open space.

When Sveinson started working in the newly built T Building, he found “that was a real eye-opener in terms of how architecture can affect people’s behaviour.”

“The stairway in the T Building is really beautiful, and I walk up the stairs instead of taking the elevator, so that’s sort of changed my behaviour,” he said.

Geography student Hannah Haji, who has been studying at Langara for three years, liked the proposed design.“It just looks like a place I’d want to be,” she said.

The plan will be submitted to the City of Vancouver for rezoning approval following a public consultation. The process will take about a year, according to Lannard.

Dry bike parking is a blind spot at Langara College