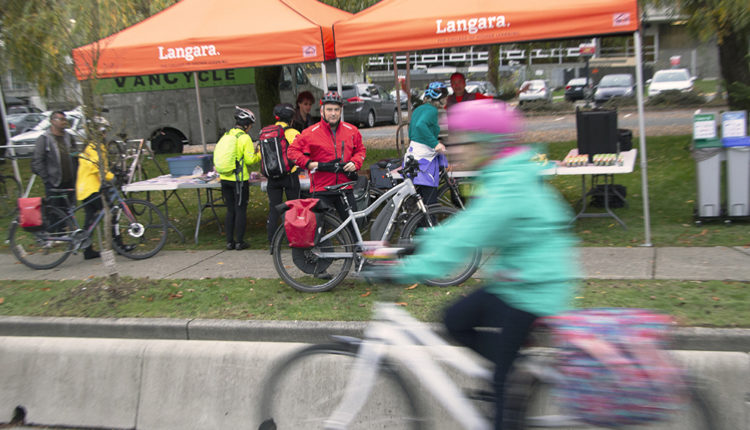 Dry bike parking is a blind spot at Langara College

On Oct. 30, Langara College hosted an event that encourages commuters to bike their way to school or work.

Bike to Work Week was organized by HUB Cycling to boost bicycling culture throughout B.C. The organization set up booths along the bike path on Ontario Street and offered  free bike maintenance, safety gear and complimentary road maps.

While Langara has bike infrastructure, there could be more done in terms of communication of those services.

“I suggest to put some signage that will let bikers know about the facilities down at P1: air for tires, tools for repairs and a lock up for bikes,” said Anne DeWolfe, an instructor at Langara and a cyclist herself.

“There are very good facilities for bikes here in the P1 parkade level, but no one seems to be aware of them,”  she said.

Ivan Pavlyk, one of the Langara students attending the event, said he was unaware of any underground facility.

“I don’t know of any underground parking. So far I have always parked my bike in front of the A building,” he said.

Eric Pace, a HUB volunteer, said that he sees dangerous behaviour on the road every day by both car drivers and cyclists and he wants to see that changed.

“It should be improved, education about lights, helmets and riding techniques,” he said.

Ways to improve cycling in Vancouver

Arno Schortinghuis, president of BC Cycling Coalition and organizer of Bike to Work Week, has his own suggestions for improving cycling in Vancouver.