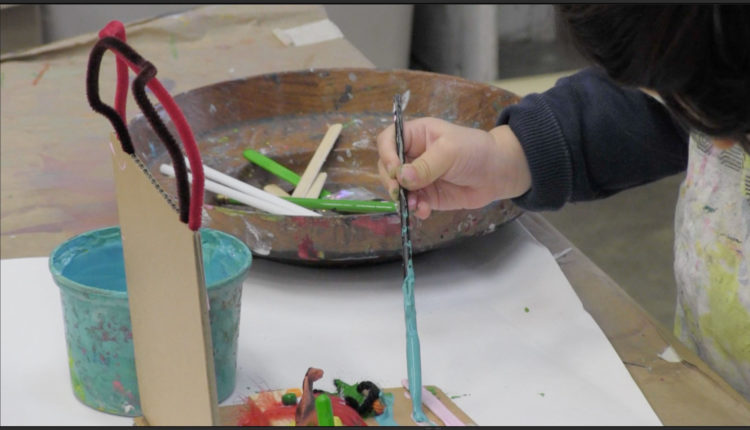 According to Giving Tuesday organizers, young Canadians are giving less than ever, which is something that the Arts Umbrella is hoping to change

Young Canadians give less to charity than older generations according to Giving Tuesday organizers. This year, a new Vancouver specific movement, #VanGives, is encouraging organizations to promote Giving Tuesday in creative ways to a younger crowd; a challenge taken up by one Granville Island arts education centre.

Today, the Arts Umbrella on Granville Island offered by donation drama and crafts workshops to raise charitable funds and to teach kids about giving back.  Parents and kids participated in the workshops by giving a minimum donation of $10. For this first time this year parents also had the option of ‘take a class, give a class’ or donating the full cost of a class to the Arts Umbrella bursary program which allows children facing financial, language or social barriers to access arts classes throughout the year.

After the rush of Black Friday and Cyber Monday, Giving Tuesday is touted as the day that kicks off the giving season and a time when the giving community comes together. The movement has tripled Canadian online giving in November since its inception in 2012, despite Canadian giving dropping this year overall according to the Charities Aid Foundation world giving index.  Lys Hugessen of Giving Tuesday Canada said that older generations tend to give consistently but young people are not involved in giving culture in the same way.

There were over 300 Giving Tuesday partner events in Vancouver today, 20 per cent more than last year, a growth Hugessen said is partly due to local individuals turning the international #GivingTuesday movement into a civic movement with #VanGives.