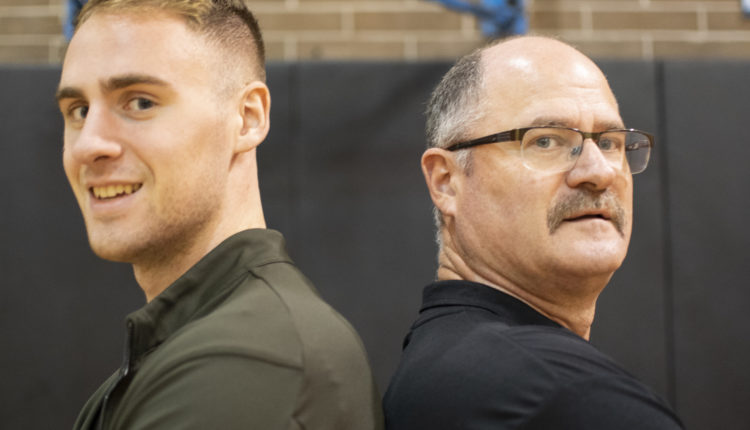 Langara Falcons keep it in the family with father son duo

Jersey No. 9 worn once again by second Anderson in 36 years

Falcons’ athletic history will be made at the Langara men’s basketball season-opener on Nov. 2 when a son will suit up for the same team his father played on nearly four decades ago.

In 1982, Ed Anderson became a member of the Falcons’ men’s basketball team. 36 years later, his son Tyler Anderson will take to the court, making them the first father-son pair to both have played on the team, according to athletic director, Jake McCallum.

Falcons basketball player Tyler Anderson poses for a photo with his father Ed. “There’s such a tradition here,” Eberhardt said.

One of a kind

Ed and Tyler are not the only example of a family legacy at Langara. Jake McCallum and his father have both worked as Langara’s athletic directors.

“It’s always great when you can have those alumni connections,” Eberhardt said.

More than an alumni connection, the reconnecting of family will be a special moment for Ed as he gets to see Tyler play for the Falcons after he spent his freshman and sophomore years for the Brandon University Bobcats in Manitoba

“The last few years he’s played out of town,” Ed said. “Knowing this year that his games are in the Lower Mainland, just a short drive away, my wife and I are really looking forward to go and watch him.”

Distance and other circumstances may have kept the two apart, but they have been connected by basketball throughout the years. Both were provincial high school all-stars and both will have worn the no. 9 jersey.

One thing is for sure, though, Tyler wants to be the more accomplished athlete in the Anderson family, “I’m here to compete and have fun,” He said. “But, at the end of the day, I’m trying to beat [my dad] so I can have that one-up on him.”

Vancouver Tenants Union expands to include chapter in New Westminster