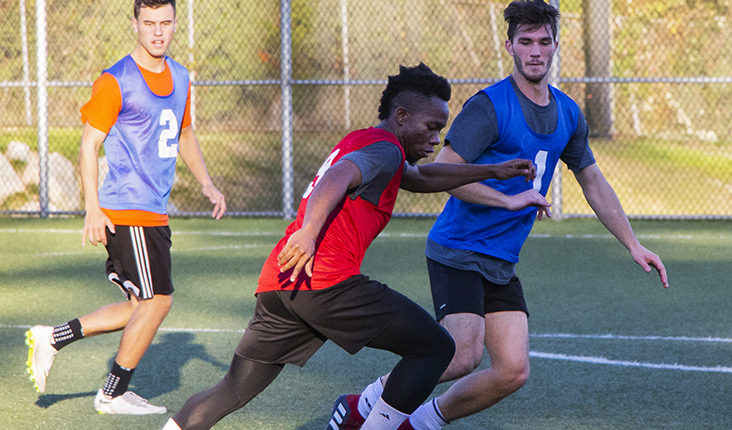 Langara will advance to nationals if they win their next game

Low numbers in the Pacific Western Athletic Association men’s soccer league guaranteed the Langara Falcons a spot in this year’s provincial playoffs before the season even began.

This year, the Falcons are one of only four teams in the league. In 2012, there were nine teams. Last year, the number dropped to five.

Jake McCallum, Langara’s athletics director, said the league suffered when Kwantlen, followed by Quest, cancelled their athletics programs. “It’s a concern,” he said. “I kind of would be lying if I said it wasn’t.”

Team captain Joey Ratcliffe agrees that the low number of teams is unfortunate. “You see all the teams so often, and four teams playing for three provincial spots is kind of weird. But it’s better than not playing,” he said.

Falcons head coach Marc Rizzardo said that the season has been a “big stepping stone” for team members, many of whom are first year students.

“It’s tough to predict with first year kids,” said McCallum. “It’s a really physical game and you don’t know what you’re going to get out of some of the first year’s but they’re contributing really well.”

Overall, team energy and morale have been high. “It’s one of the nicer teams I’ve coached in the last three or four years,” said Rizzardo.

“We all have fun together, we all lose together, and we know that everyone’s here for the same goal, which is to go to nationals,” midfielder Devon Gautreau said.

Since there are only three other teams, Gautreau said the Falcons have gotten very familiar with the competition. “If anything, it prepares us more for provincials,” he said.

Langara finished third in the regular season. The Falcons will play the Douglas College Royals in the provincial playoffs on Oct. 26.

Dancing the way to healing

Langara launches hands on learning at the Makerspace studio