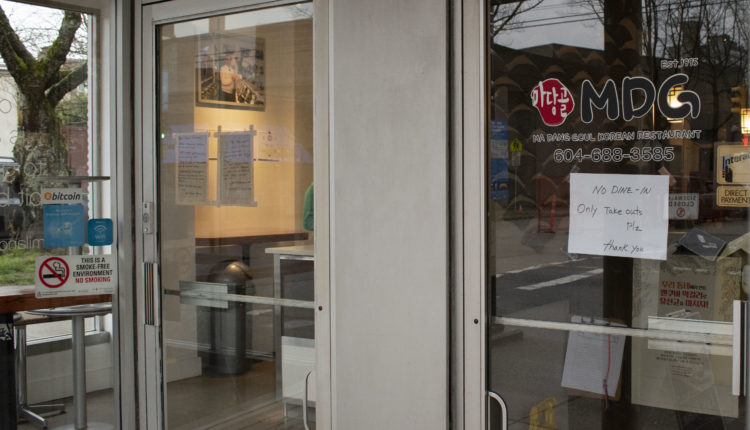 Many businesses have had to adjust their business model or close entirely because of COVID-19, resulting in widespread layoffs. Lucas Jornitz Photo

B.C. students dependent on jobs to pay tuition and living expenses are now dealing with layoffs as the global COVID-19 pandemic has shut down large parts of the economy.

Langara student Benjamin Adam-Keattivanichvily lost his work due to the virus. He said he was working three shifts per week at Kaylin and Hobbs Pickles, a specialty foods retailer, until he was laid off entirely.

“It’s not going to hurt me, but it’s really just annoying and puts all my plans for the rest of the year off,” he said.

Adam-Keattivanichvily said the hit to his savings means he will have to delay travel plans, but he said he knows others who would not be able to afford tuition if they are not paid for weeks at a time.

Aliya Boulanger, a kinesiology student at SFU, had been working as a lifeguard in Coquitlam. She said she lost her job after COVID-19 forced a shutdown of pools and community centres in B.C.

Boulanger said she was gradually losing work and then was let go entirely. She said she initially received an email saying that everyone was going to work until March 20. Soon after, she was given notice that all staff would be laid off.

Boulanger said she will likely be hired back once the community centre reopens, but losing income will make it more difficult for her to pay tuition.

“I’m pretty lucky in that my job pays well, and it makes me pretty happy to work there, so I haven’t had to take out student loans,” Boulanger said. “If I don’t have that job, I don’t know what tuition is going to be like.”

Andrea Nunes, an academic adviser at Emily Carr University, said it’s reasonable to anticipate students will be losing their jobs as businesses close due to COVID-19, and unemployment may result in students unable to continue attending post-secondary school.

Nunes said she is concerned over the impact this could have on admissions.

“If students aren’t able to work, a lot of them aren’t going to be able to pay their tuition,” she said.