The draft of the 2050 Vancouver Plan highlights the importance of spreading out dense housing throughout Vancouver and creating more independent neighbourhoods while restoring eco-systems around the city.

The city of Vancouver outlined the draft plan at a press conference Tuesday, after two and a half years of research and public engagement. This final phase is to present the plan to different media outlets and the public until April 24.

“This is a new way to plan the city of Vancouver, how we grow how we spread more housing options across all neighborhoods of the city,” said Theresa O’Donnell, general manager of planning, urban design and sustainability. “Instead of concentrating them along the major thoroughfares and corridors or just in specific areas.”

According to the city, Vancouver is at the economic and cultural centre of a rapidly growing region expected to grow by about a million people over the next 30 years. The draft Vancouver Plan identifies where and how future growth and change should take place in the future.

Part of the plan focuses on spreading the density of housing across Vancouver looking at some of the less dense areas of the city like Kerrisdale or Dunbar and in the future having more multi-family dwellings and high-density housing around more spread-out areas of Vancouver.

To help accommodate with more dense housing in Vancouver, the plan highlights creating “people-first” streets and restoring ecosystems around the city.

The plan also looks at creating complete neighbourhoods that are filled with different services.

“It also is a very important idea in terms of moving us toward our climate target of having 90 per cent of people living within an easy walk or roll of their daily needs,” said Hiebert.

Having taller buildings increases housing affordability, variety compared to spread out neighborhoods, according to the draft presentation, and has different benefits.

“It’s easier to run services, to taller buildings,” said Egan. “You end up with one site to collect the garbage of maybe like 50 people rather than 40 stops. You end up with those people all living together and hopefully forming some form of a community.”

At the end of the presentation Coun. Kirby-Yung spoke of her thoughts on the plan.

“I am really pleased to see the driving principles behind the plan in terms of affordability, livability and sustainability and I think that’s what we’re hearing consistently from residents,” said Kirby-Yung

The next step of the plan is receiving community feedback through an online survey and outdoor information sessions being hosted on weekends until April 24. The feedback received with will be shared with city council when the plan is presented in June.

“It’s a long-range plan to guide growth and change for the next 30 years and longer,” said Hiebert. 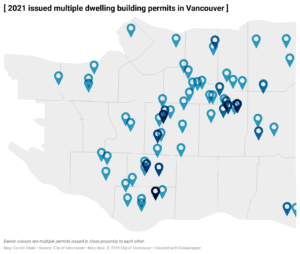 Artist challenges PPE waste as many mask up again