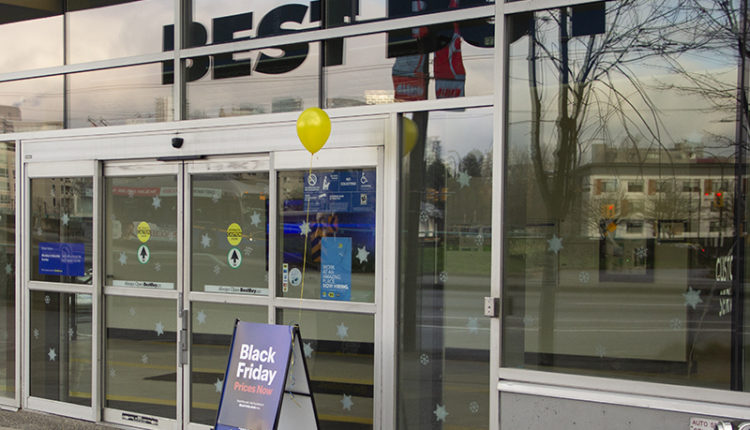 The front doors of Best Buy on Granville Street. Best Buy Canada is boasting a bigger and better Black Friday sale than before. Photo Ray Chopping

Consumers not swayed by sales: Retail Council of Canada

Vancouver stores are gearing up for this year’s Black Friday sales event, but not all consumers are convinced there are deals to be had.

“It’s not likely to make me want to buy anything I don’t need,” Keith Loh, an out-of-work software engineer, said.

According to a Retail Council of Canada survey earlier this month, almost 43 per cent of Canadians said they would likely be taking advantage of the Black Friday sales this year, something the big stores will be looking to cash in on.

There are more deals to be had this year than ever before,  said Anjee Gill, communications specialist for Best Buy Canada. “We will have hundreds of items on sale.”

Best Buy first introduced Black Friday sales to its Canadian stores back in 2012, when they only had 30 items on sale, Gill said.

What was once only a United States phenomenon has now become just as important this side of the border.

“People get a lot of their news from the U.S., so they’re very used to Black Friday,” Loh said.

But not everyone is buying into the hype. Gursewak Singh, a computer studies student at Langara College, said he will not be buying anything this Black Friday.

Another Vancouver resident, David Gao, who lives right next door to the Best Buy on Granville Street, said that while he always buys in store, he wasn’t planning on buying anything this coming Black Friday.

“I don’t see too much difference between Black Friday and the normal sales,” Gao said.