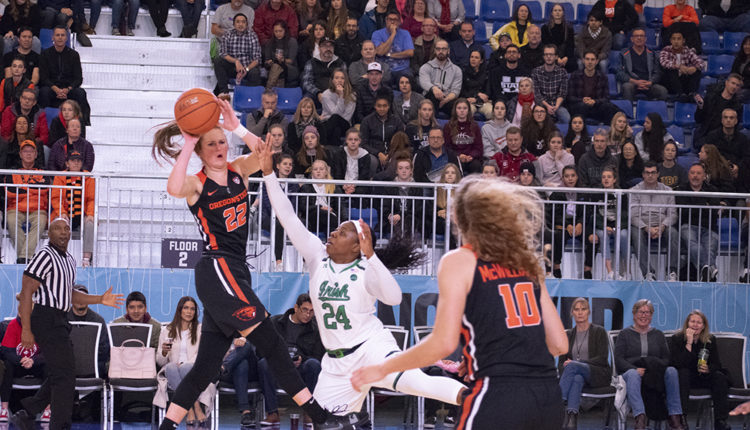 This was the first regular season basketball tournament to take place outside of the U.S. Photo by Adam Levi

From Nov. 18-24, a dozen of the U.S.’s Division-1 men’s and women’s college basketball teams showed off their skills in front of thousands of fans inside the Vancouver Convention Centre.

A lack in competitive basketball

Since the NBA’s Vancouver Grizzlies left for Memphis in 2001, Vancouverites have not had the opportunity to see high level competitive basketball.  A fan and Vancouver resident, Assad Thaver, came out for two of the six days the event was held, and is already eager to attend if there is a tournament next season.

“It’s been great,” Thaver said. “It brings out the community and new people to the city.”

There have been exhibition games at the collegiate level in the city before, but this was the first regular season or post season NCAA D1 basketball tournament to take place outside of the U.S. It likely won’t be the last tournament in Vancouver considering the positive turnout and response from players and coaches.

“I loved Vancouver,” said Muffet McGraw the University of Notre Dame women’s head coach. “British Columbia is a beautiful place. It was really a great place to have a tournament.”

A look into the future

Their star guard and one of the top players in D1 women’s basketball, Arike Ogunbowale, played a significant role during the team’s tournament run. She believes that the strong slate of competition at the tournament has helped prepare Notre Dame for their upcoming games.

“We play the Iowa [Hawkeyes] and then UConn [Huskies] next, so this tournament definitely is going to give us some momentum going in,” Ogunbowale said.