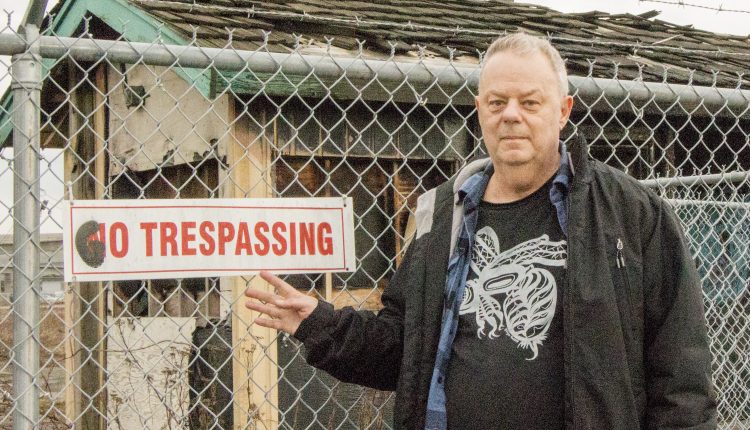 Green-space activist Don Larson beside a “Go Trespassing” sign on the TransLink lot, on March 16. Photo by Rica Talay

Time is running out for Marpole park development

TransLink unable to make up its mind about industrial wasteland

A Marpole park is still on hold more than two years after money was granted for its construction, due to an increase in the price of the land.

The $2 million granted by a Community Amenity Contribution, a city-based fund provided by property developers, needs to be used by November 2018. The city has been trying to purchase the land, owned by TransLink, since 2015.

The park would border the Fraser River to the south, Kent Ave. to the north and sit between Heather and Laurel streets.

Michael Wiebe, Vancouver Park Board chair, said the delay is a result of the waterfront property’s increasing value.

“The value of the land is much more expensive than it was two years ago,” Wiebe said. “I know that the city is receptive.”

Wiebe said he is working with Vancouver Mayor Gregor Robertson to create green spaces on this site and in other areas of the Marpole community.

“It’s a priority for a new green space to be built in Marpole,” Wiebe said, noting the influx of new development in the area.

Don Larson is a green space activist and resident of Marpole who has long advocated to have a park built on this land. He said TransLink is the main reason why things are still on hold.

Space is currently a wasteland

“TransLink’s been sitting there for 13 years,” Larson said, of the site. “It’s just an industrial wasteland.”

Terry Slack, a fellow activist working with Larson said Robertson told the community things were going to happen quickly, but that was three years ago.

“It’s been on stall ever since,” Slack said. “TransLink can’t make their minds up whether they can use that property or not.”