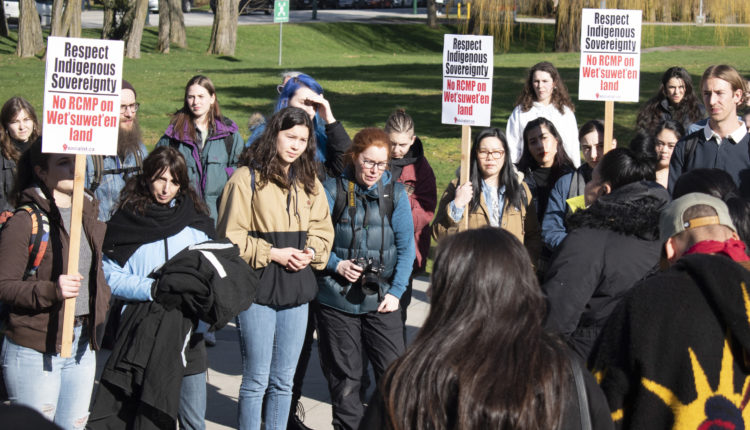 Langara students and faculty gathered on the Langara campus in support of the Wet'suwet'en on March 4. Photo by Lucas Jornitz

The media and educational institutions need to do a better job of informing the public about the reasons why people are demonstrating in support of the Wet’suwet’en, said student organizer Tanis Wilson.

Wilson was an organizer for the March 4 walk-out demonstration on the Langara campus, part of a national movement in which students from post-secondary campuses like SFU, UBC and the University of Victoria left their classes to walk in support of the Wet’suwet’en.

Speaking at last week’s Langara protest, which attracted some 60 demonstrators, Wilson told fellow activists not to talk to the media. In an interview with The Voice, Wilson said Canadians should be using resources available to teach themselves about the impact of the government’s treatment of Indigenous people.

“It’s Canadians’ responsibility to take the time to learn the truth,” Wilson said. “Indigenous people can’t keep constantly trying to teach you guys about this.”

Rima Wilkes, a UBC professor who specializes in the media and First Nations, felt media coverage of the Wet’suwet’en protests has improved on past coverage. However, Wilkes, who has researched Oka, said there are still contentious issues around how reporting on the conflict has been handled. She said while the protests are in the public interest, upholding one’s rights shouldn’t be questioned.

“Asking people what they think about Indigenous rights is inherently problematic because what they think is irrelevant,” she said, adding the topic was difficult as the protestors are very courageous, but also that the issue raises tensions.

“If you have rights, whether the majority agrees with your rights or not is beside the point.”

Kesley Pepion, a supporter who demonstrated last week at Langara, emphasized that the demonstrations were about more than just the pipeline route, there were greater implications.

“It’s a bigger cause. It’s not just the pipelines. It’s about Indigenous rights and respecting our treaties.”

World Health Organization declares COVID-19 to be a pandemic

Get off your butt and move, trainers say