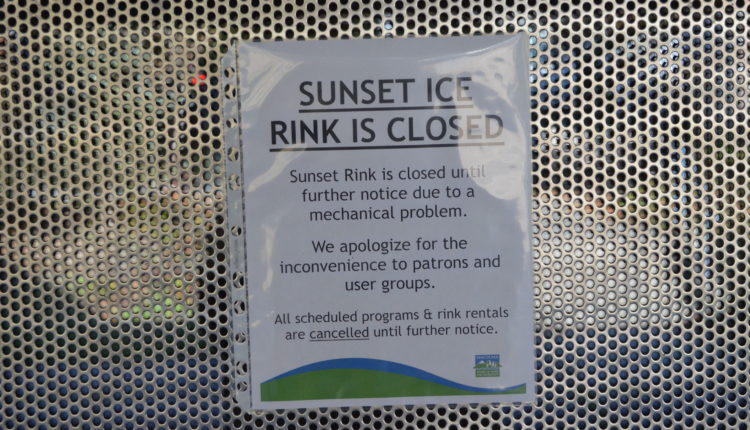 Sunset Rink closes their doors due to mechanical problem with the ice plant but have plans to open again in the spring of 2019. Photo by Mandy Moon

To the dismay of a community, Sunset Rink in South Vancouver closed its doors on Sept.26, displacing hundreds of skaters in the area.

Nearly a month later, no reopening date has been confirmed.

The rink was shut down due to a mechanical problem with the ice plant. The ideal fix is to replace the refrigeration system completely, as it had been planned for spring 2019.  To date, no replacement strategy has been announced.

As an organization severely impacted by the rink’s closure, the Sunset Skating Club, which is comprised of roughly 350 members, is now without a regular practice space.

“We’ve had to scramble to find alternate ice,” said Gary Lim, president of the Sunset Skating Club. “Parents end up doing a lot of travelling, from one rink to another.”

Several other clubs have offered to help provide ice time but most are at capacity.

Brittany Wong, arena programmer at the Killarney Community Centre, said that in order to accommodate some of the misplaced skaters looking for lessons, the park board has shifted a few instructors around the city.

“My Saturday staff at Sunset were put-out, so we tried to find shifts that match that schedule,”  Wong said.

“It can be far, but people who want to work are going to have to travel.”

Nester Fu, a local father, said he used to bring his son to play in the snow produced by the rink. Now the two play in a dirt-pile where the snowbank once stood.

Fu was surprised to learn the rink’s refrigeration system was roughly 23 years old. Especially since the Sunset Park Community Center had completed construction and park renovations, as recently as June 2018.

“The park and playground, all the way to the community center is new. Brand new, ” Fu said.

In 2015 the Vancouver park board proposed spending $3 million to update Sunset Park with new pathways, a playground, a skate park, and a basketball facility. Unfortunately upgrading the then 20 year old refrigeration system was mentioned in the 2015 proposal.

Langara launches hands on learning at the Makerspace studio