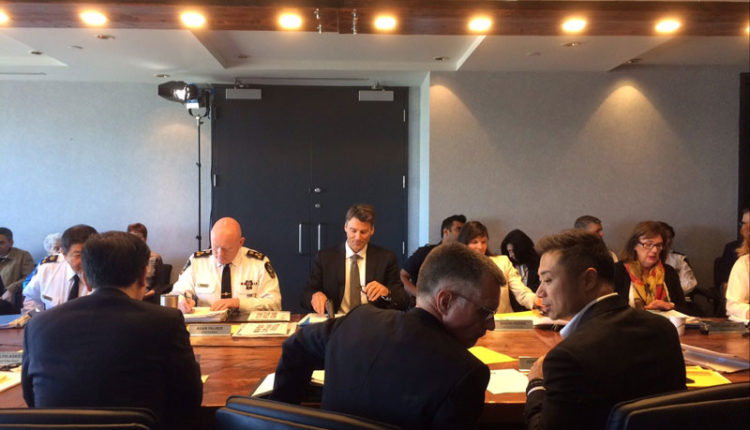 Shootings in Vancouver on the rise, says VPD

The number of shootings in Vancouver is on a sharp increase over previous years and that has Police Chief Adam Palmer worried about a rise in gang activity.

A Vancouver Police Department report that went before the Vancouver Police Board Oct. 26 shows there were 28 ‘shots fired’, or shootings, between January and September of this year. That’s an increase from 18 for the same period last year, and seven in 2015.

Shootings on the rise

“We definitely do have some concerns about ongoing gang violence in Vancouver and in Metro Vancouver. We do have a number of things underway to address that,” Palmer said at the police board meeting. “We are in one of those fluctuations that we see over time where there’s a new set of young and up and coming gangsters and they’re shooting each other and murdering each other and causing all kinds of mayhem.”

Palmer told board members that he would inform them later in a private meeting about some of the projects police had launched to target the groups involved in the shootings, which have primarily occurred in southeast Vancouver.

The VPD report also shows the number of homicides and bank robberies have increased this year compared to previous years. The first nine months saw 15 homicides in Vancouver, compared to 10 in 2016. Bank robberies jumped from 39 in 2016 to 42 this year.

Palmer said the increase in robberies is usually connected to known criminals, or parolees, who just got out of jail.

“Bank robberies are interesting, they do go up and down. It really depends on what chronic offenders are out of jail at the time,” Palmer said. “It almost exclusively is done by parolees — people that are in the federal prison system. They get out of jail, they’re addicted to drugs, they have to feed their habit and that’s what they know.”

Though robberies have increased in the city, the chief said the type of crime has a high solve rate for police. He noted one arrest can often result in a suspect being charged for multiple heists.

Malcolm Chivers, director of corporate security for the Canadian Bankers Association, said the number of bank robberies in Vancouver has decreased in the last decade, but has been known to fluctuate.

“I can also say that we have a very good network amongst the banks and law enforcement where we’re able to adjust our efforts to focus on any significant increase at all,” Chivers said.

David MacAlister, director of the school of criminology at SFU, said in an email to The Voice that the increase in robberies has minimal impact on the violent crime rate in Vancouver.

“At a minimum, one should be looking at a full year to get some idea of what is really going on, and preferably looking at trends over a longer period,” MacAlister said. “With small numbers, a single incident can throw the percentages off to a large degree.”

Though violent crimes in Vancouver have increased, property crimes such as break and enters to homes have decreased. The report shows there were 1,386 break-ins over the first nine months of this year. That compares to a high of 1,777 for the same period in 2013.