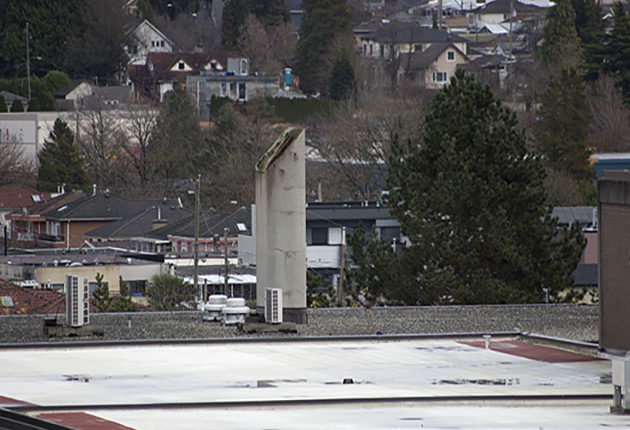 Several unstable structures at Langara have yet to be fixed, seven years after an engineering report obtained by The Voice warned that students and instructors could be injured by them in a serious earthquake.

While the college has taken some action to demolish one heavy chimney that a 2010 report warned could fall and harm people, another one remains on top of Building A, the primary hub of the school.

The engineering report, by Weiler Smith Bowers Consulting, was provided to The Voice after a freedom of information request.

Earthquakes could also hamper Langara’s ability to respond to fires after the shaking stops, the report said.

“Fire sprinkler equipment and piping observed in the equipment room do not appear to be seismically restrained against lateral movement. Damage to this equipment and to water mains may be extremely costly as the ability to fight or control fires after an earthquake may be greatly reduced, exposing building occupants to further danger,” the report says.

Wendy Lannard, senior facilities manager at Langara, said fixing the fire sprinkler equipment is an ongoing project as the school updates its master plan, which includes future buildings on campus as well as a replacement of Building A.

Concrete shear walls placed in the Building A are discontinuous at various levels, according to Weiler Smith Bowers. The firm states that the building does not meet minimum requirements and does not have reinforcement steel cages at the end of its walls. Also, the brick walls on the exterior and interior of the building are extremely heavy and have little to no reinforcement, making these walls more likely to fall apart.

Since receiving the seismic assessment in 2010, Langara has executed and organized various strategies to help alleviate some of the seismic issues in its main building, Lannard said.

Since then, one of the two heavy chimneys above the Building A has been removed, and the second chimney is in the Langara capital 2018/2019 project list.

Lannard said that as engineers come across non-seismically restrained piping and equipment it is then taken care of, for the most part. Lannard also said that practice of restraining non-structural elements, such as bookcases, cabinets and suspended ceilings is an ongoing task.

The “major roadblock” that has significantly delayed Langara from replacing or retrofitting its main building is a lack of funds from the provincial government, she said, adding that the current total renewal costs are at an estimated $80 million.

Rodney Porter of the Advanced Education Unit of the B.C. Government said that all submissions made to the Ministry are subject to prioritization and availability of funding. Porter also said that Langara submitted a proposal this summer for the renewal of Building A as a part of Langara’s updated master plan.

Langara geology and natural hazards teacher Mark Smith said he doesn’t feel in danger in the building right now. He said he hopes that students and staff would know what to do in an earthquake.

Langara’s emergency procedures warn students who are inside during an earthquake to get under their desk or table.

Smith wants the school and the government to work out this complex issue.

“A commitment by the government is needed to ensure that the building is up to the modern code,” Smith said.