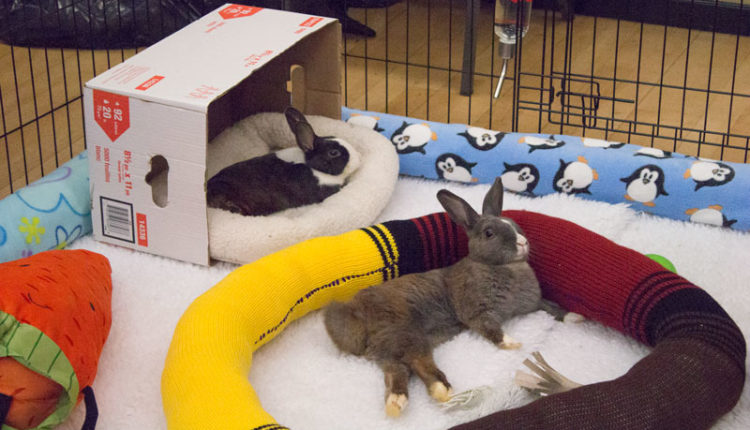 Michelle LeMoignan’s rabbits, Jingles and Blossom, at the Rabbit Festival in South Vancouver on Saturday.Photo by Ana Rose Walkey

A host at the Rabbit Festival in South Vancouver had some unorthodox advice for treating ailing bunnies.

Michelle LeMoignan — board member, foster and educator from the Vancouver Rabbit Rescue and Advocacy — spoke about bunny care and rescue at her booth at last Saturday’s festival at the Scottish Cultural Centre. LeMoignan said she treats ailing rabbits from her Delta adoption service as well as her own with Cannabidiol or CBD oil, a non-psychoactive compound found in cannabis. The rabbits suffer from ailments such as seizures, arthritis and tremors.

LeMoignan said it all started a few years ago when she worried that her rabbit Jingles was going to die of seizures. She started treating him with CBD products.

“He was so bad at that point I was kind of like, well if I kill him, I kill him, because I’m going to end up having to euthanize him anyways,” LeMoignan said.

LeMoignan said The Medicinal Cannabis Dispensary supplies her with free CBD oil and have given multiple financial donations to help pay vet bills.

Since LeMoignan has been treating Jingles with CBD, she says he has become stronger and has been having fewer seizures.

Melissa Naughton, assistant manager at The Medicinal Cannabis Dispensary at the Hastings location, is very involved in their pet division. Naughton said they mainly cater to cats and dogs, but many animal owners are using CBD as alternative pain medication for their pets.

Dr. Katherine Kramer, a veterinarian at the Vancouver Animal Wellness Hospital, said CBD is not supported by the College of Veterinarians of British Columbia as vets are not supposed to prescribe it or recommend it.

According to the college, there is no legal pathway for veterinarians to prescribe cannabis products to animals because the Access to Cannabis for Medical Purposes Regulations does not apply to veterinarians or animals.

“It’s experimental, vets are not supposed to prescribe it or recommend it,” Kramer said, “That being said, it’s amazing.”

A way to go green is go waste free