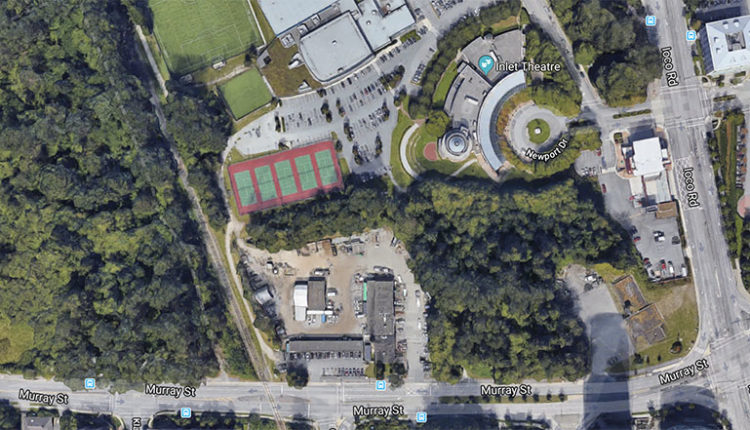 A rezoning application for the "fire hall and works yard sites," in the heart of Port Moody, are headed to public hearing on Mar. 27.

Port Moody Mayor Mike Clay is defending his decision to support the rezoning of a paired parcel of city lands to accommodate buildings up to 34 storeys despite opposition from some residents and city councillors who fear such development risks ruining the city’s small-town feel.

Clay was among four of seven members on council who endorsed sending the rezoning application for the so-called “fire hall and works yard” sites to public hearing. The sites sit in the heart of Port Moody, at the corner of Murray and Ioco streets.

“I want to hear every option as a responsible custodian of taxpayer assets and money and budgets and land,” said Clay, noting that rezoning will help determine the true market value of the land and better inform decisions on its future use.

The sites are seen as a potential future home for an expansion of facilities such as the library, recreation centre, seniors’ housing, a new city hall, park space, or a mixed-use development that includes some of those amenities.

Nearly two dozen residents, including Kevin Eldred, spoke in opposition to the proposed rezoning at a Feb. 6 meeting of the city’s community planning advisory committee.

Eldred underscored the city’s “unique relationship with nature” in his comments.

“The very act of changing this land from its current use…flies in the face of that relationship,” said Eldred, echoing the concerns shared by many speakers that night.

The heart of a community

Jeff McLellan, a Port Moody resident and member of the city’s planning advisory committee, said he understands the fear that development could mean a loss of Port Moody’s unique character, but believes the city can both grow and retain its unique character.

“For me, the small town feel is in our people, it’s in our communities, it is not in the built environment,” McLellan said. “It has nothing to do with what our city looks like.”

Coun. Hunter Madsen, who voted against sending the application to public hearing, said he believes his colleagues’ reasons for rezoning were inadequate. He added the city’s plan risks shortchanging the community by trading its potential use as the site of future amenities for quick cash from developers.

“If we keep it zoned for public institutional, as it is today, we can always make such decisions later, down the road, especially when the property is even more valuable, and we would stand to gain a much higher value in exchange for it,” Madsen said, who would rather see the site used to expand its over-capacity civic facilities.

The mayor told The Voice that any notion his city council would put a developer’s money before the health of the community was “ludicrous.” Clay added he recognized it was the residents that would ultimately have the power to decide the future of the site.

“We know that we’re trying to move some concepts ahead that are in the best interests of the whole community, [but] sometimes you have to back away from that even when you know it’s the right thing to do,” Clay said, referring to pushback from some residents.

The public hearing for the application is scheduled for March 27 at Port Moody city hall.