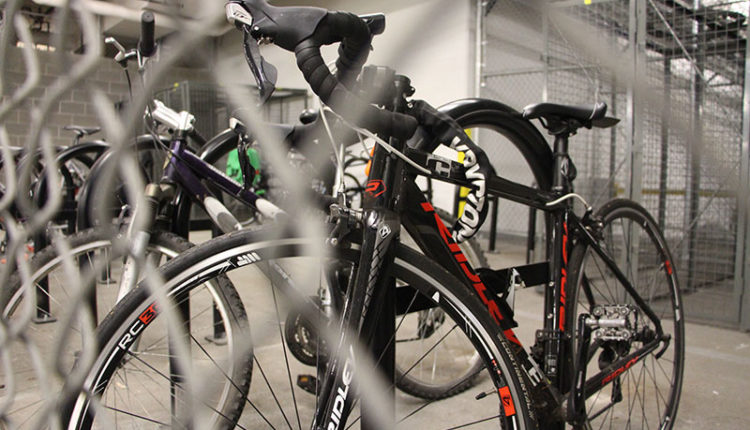 A metro Vancouver survey found that 42 per cent of residents fear their bikes will get stolen or damaged, bike owners and advocates have suggestions for improvement

After Kevan O’Brien had the front tire stolen from his locked bike that was inside his Gastown building’s parking garage, he lost his trust in leaving anything there.

“On a scale of one to 10 being inside my apartment and locked up I’d say the parking garage is a four for me. Pretty close to leaving it on the street,” O’Brien said.

O’Brien’s wariness is not uncommon in the region.

It turns out that more than one-third of people in the Lower Mainland don’t use bicycle parking facilities in their apartment garages from fear of theft, damage or lack of room, according to a Metro Vancouver survey.

The survey, which collected data on several apartment-parking issues, found that 42 per cent of Lower Mainland residents were afraid that their bike would be stolen or damaged. Another 26 per cent of respondents answered that the facilities are too full.

O’Brien said that, besides the theft, a problem for him is that every bike rack in his garage is full and he is still not comfortable with leaving his bike in the garage.

Something that O’Brien would like to see in his parking garage is individual bike lockers that could be used for storing helmets, tools, and other riding accessories. Although the lockers may cost more, O’Brien believes that there is a growing market that would use these lockers.

“As more people get e-bikes and stuff and those very expensive road bikes, people will spend more on that than they do vehicles so people treat them the same way and you wouldn’t have to pay for security,” O’Brien said.

A security ‘hack’ from Rack Attack

Someone who works for a company that sells and installs bike racks all over North America says that having a separate room just for bikes is one solution builders could try.

“The best thing for these people is to actually have a room where only people with bikes can actually get in and out,” said Gordon Kingston, a 10-year employee of Rack Attacks.

An added problem of frequent bike theft in parking garages is posed by the garage’s own private nature.

“A lot of the time, it’s when it’s in a parking garage and [the thieves] have six hours of uninterrupted work to saw through stuff,” Kingston said.

Another option for locking your bike

Richard Campbell, the executive director of the British Columbia Cycling Coalition, suggested one other option could be to make it easier for owners to store their bikes in their living space.

“This is not the ideal solution but currently the landlords and stratas can ban people from taking their bikes up to their apartments so that would be something that the Strata Act and the Residential Tenancy Act should be changed so that bikes can’t be banned from apartments.” Campbell said.

Another suggestion Campbell had was to make the creation of bicycle parking more enticing for landlords.

“The government could provide incentives for improving bike parking. They have incentives to add electric vehicle charging to existing buildings,” said Campbell. “This is probably a more cost-effective and environmentally good way of encouraging people to use sustainable transportation.”

Hints, tricks and tips to protect yourself from being hacked