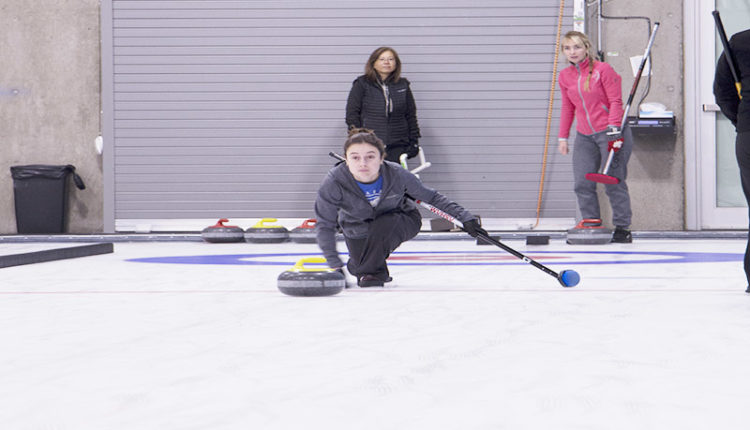 Hilary Potter, a member of the only women’s deaf curling team in B.C., sets up her stone at Hillcrest Centre on Oct. 13. Photo: Myra Dionne

The first B.C. team since 2012 may one day represent the province in Canada Deaf Games

Seven women will soon be sweeping the ice as the only registered all-female deaf curling team in British Columbia.

Cecilia Tung, a bronze medal winner at the 2017 World Deaf Curling Championships in Sochi, Russia, is hard of hearing. She has curled for the last 13 years on deaf and hearing teams. While speaking with the Voice she said the main difference between the two is in hearing curling, commands are yelled to one another, but in deaf curling they sign the commands.

The last time B.C. had an official women’s deaf curling team was in 2012, according to Tung.

“I got the ball rolling and reached out to a couple of females that I know who curl but have not curled for a long time,” Tung said. “The point of us getting together is just to have fun. I don’t want to make it a serious thing but if they really want to go to the Canada Deaf Games, OK, I’ll go too.”

Eric Nielson, the team’s manager, is also deaf. Communicating with the Voice with pen and paper, he said the group only started a few weeks ago, but he is encouraging the team to represent B.C. at the Canada Deaf Games in 2019.

“I have a good feeling that we have a good mixed team in terms of ages and experiences,” Nielson said. “The number one important thing is to have fun but be willing to work hard.”

Leonor Johnson, office administrator at BC Deaf Sports Federation, said in an email that deaf curling in Canada is declining. The Canadian Deaf Curling Championship, which takes place in February 2018, has been hard to host because of costs and the time it takes to arrange.

“It was required to have at least three provinces or more at CDCC and lately, there have not been enough women teams or mixed teams,” Johnson said.

Tung’s team will have their first game at the BC Deaf Curling Playdown this weekend at the Marpole Curling Club.