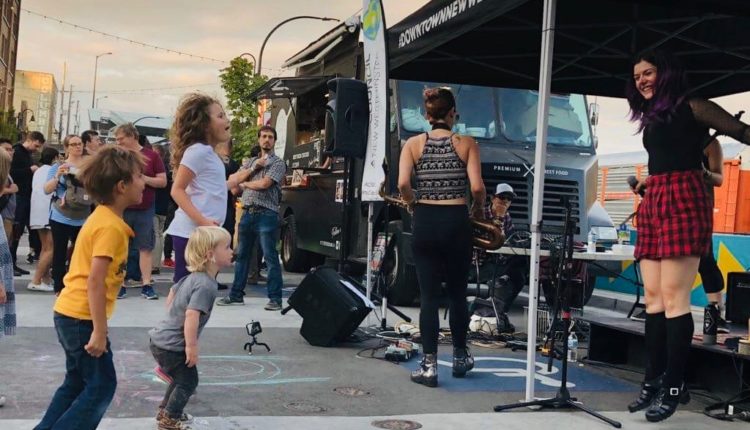 New Westminster artists and musicians are going to get the chance to create and perform in local parks and other public spaces, thanks to a new local initiative.

In partnership with the city, the Downtown New Westminster Business Improvement Association has launched a brand-new placemaking program to inspire the community.

The program is inviting individuals, businesses and not-for-profits to submit proposals for unique and innovative activations. Three will be chosen.

Proposals could include a pop-up dance party, an art installation or a family-friendly event, just as long as they get people outside, foster social connections and build community, which are the main program goals.

Rob Leishman, a local musician and manager of Suna Studios, feels the activation opportunity is incredibly important for the city. Leishman, who has been playing bass in bands since ‘93, made an okay living back in the day. Nowadays, he could not imagine how he’d make a living playing the current local scene.

“Playing in public spaces just allows so many different artists to be discovered. It’s a big thing, “Leishman said.

Stephen O’Shea, from the Arts Council of New Westminster, is excited for new opportunities for artists and creatives to bring forward their ideas to produce events for the community.

“No one should be afraid of approaching this low-barrier application process with their great idea for activation. But what I’m most thrilled about is not just the financial support, but the additional organizational support from the BIA. Having them assist with the extra challenges around mounting street activations will ensure all three of these pitches have significant impact within our community, “ O’Shea said.

His group vetted the initiative to ensure it was artist-friendly.

The program is looking to fund the three projects in 2019 for up to $3,500 apiece. This funding would go towards the costs of producing the event or performance, and could include materials, artist fees, insurance, marketing, equipment rental and supplies.

One example of how successful this idea has already been in one Leishman saw last year — a band called Raincity — which often played at the pop-up public space, Fridays on Front. The band built up an audience, and now it is playing all over the city. The band is currently recording its upcoming EP, set to release later this year.

“The last time we played, there were a lot of children dancing and singing to our music and enjoying the festival. That is definitely something you don’t get at a regular gig. Their energy made the whole festival a lot more vibrant,” Twiddy said.

Curated by the arts council, Fridays on Front ran for eight consecutive weeks, every Friday night, from July to August last year. This event took full advantage of its public space on the 600 block of Front Street, where it featured artisan vendors, live music and food trucks.

New Westminster has also played host to many other public-space events in the last year. This included Uptown Live, which featured four music stages showcasing some of the top emerging talent in B.C., and Music by the River, a family-friendly event held at Westminster Pier Park with a wide variety of the arts, including live musical performance, two DJ stages, busking performances, artisan vendors, face-painting and ribbon-dancing.