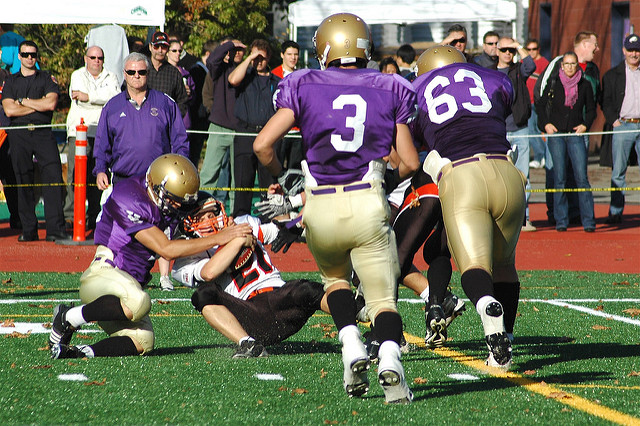 Vancouver College is one of the high schools bennefiting from the new set of rules. Photo: via Flickr by Jon Chiang

The BCSSFA fights to decrease concussions in a high school level

With new rules in place to fight concussion issues in football, local high school programs are encouraged by the initiatives.

Earlier this year, the BC Secondary Schools Football Association passed new rules and regulations in an attempt to decrease the amount of concussions and head trauma high school players may absorb. New rulings include less full contact practices, certified team doctors at practices and games, and concussion education workshops for coaches.

Dr. Gary Koss of the Vancouver College football program has been the team’s physician since 1987. Koss is pleased with the actions taken by the BCSSFA, especially the mandating of designated individual to assess a concussed player. However, the long-time team doctor believes players who lead with their head when tackling should face tougher penalties.

“I think they should get ejected from the game and not get a 15-yard penalty,” Koss said. “It is a serious infraction.”

With over 30 years of coaching experience, Tony Howie, Athletic Director of Notre Dame Regional Secondary School in Vancouver, said the shortened amount of full contact practices has led to weaker in-game play to begin the season. Nevertheless, Howie feels the most important result of the practice rule is that a young player’s long-term health is unhinged.

“By cutting down the frequency in practice, we lose a bit in terms of technique in games because we are not going full speed in practice as much,” said Howie, who added, “but that’s a fair tradeoff for the health of the players.”

The practice rule states that, once the regular season starts full contact should be narrowed to 30 minutes a day and 90 minutes a week.

Dino Geremia, defensive coordinator for the NDRSS varsity football team, was the facilitator of the coaches development clinic in August that educated coaches on strategies to make the game safer, such as teaching proper tackling techniques.

-With files from Taran Gill.