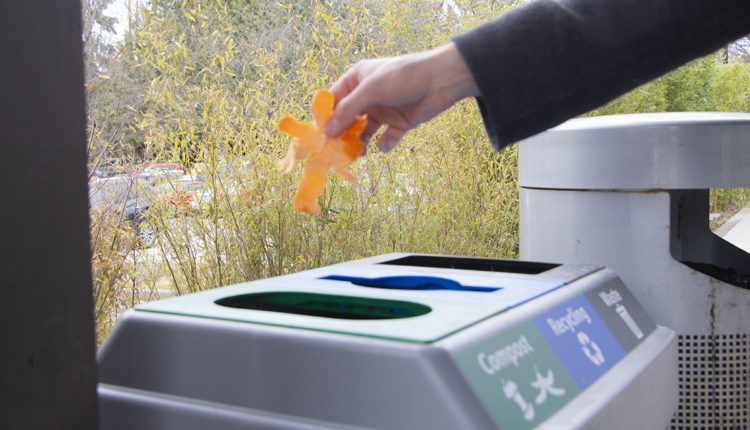 A Langara student tosses an orange peel into the new three-stream recycling bin that sits just outside of the south entrance to the Library.
It is the first of several new bins that will be added to outdoor locations around campus. Photo: Nathan Durec

Langara College is rolling out new three-stream recycling bins outdoors over the next few months, with the first one already installed next to the library’s south entrance.

The college just isn’t telling anybody about it yet.

The first outdoor bin, which has three compartments for recycling, waste and compost, is located outside the south entrance of the Library. Additional bins will be added later this year.

Dwayne Doornbosch, director of facilities, said this is phase two of a plan to make the college more sustainable, having already upgraded the indoor recycling bins.

The college produces over 750 pounds of waste every day, according to a 2013 waste study. Since then, Langara has been working to become a zero-waste institution under their Sustainability Program.

“More garbage bins will be switched to recycling stations in the coming months,” Doornbosch said. “The locations are yet to be decided.”

A need to let students and faculty know

The college plans to wait until September 2019 to place signage and educate students and staff.

Doornbosch said that the college wants to get the maximum number of new students to be aware of the bins.

“September is impactful because of the number of new students,” Doornbosch said.

Facilities manager Raymond Yeung said education and signage will be important for the bins.

“The signage is constantly being reviewed to help sorting be easier for users and the education component will help volunteers engage students in sorting situations, likely to be restarted in September,” Yeung said.

Some at Langara, like engineering student Shimon Takagi, saw the value of the outdoor bins, but were unaware of its placement on campus.

Babai suggested that posters would be the best way to reach students about the new bins.

Doornbosch said educating people about the bin shouldn’t be required for them to be used.

“It should speak for itself,” Doornbosch said.

Students should be cautious of keyboard cleanliness, study says