Langara students, and others across the province, were urged last week to join in a movement to cap the rising cost of post-secondary education.

The “Tuition Freeze Now” campaign started at SFU in October after their latest tuition hike, and is now backed by their student body.

All post-secondary tuition fees for domestic students are capped by the provincial government two per cent per year, but international student’s tuition can increase by up to 20 per cent per year, said SFU student campaigner Kayla Phillips.

“The consultation process was a total sham. It turns out the budget is already set in stone almost a year prior before it’s implemented,” Phillips said. 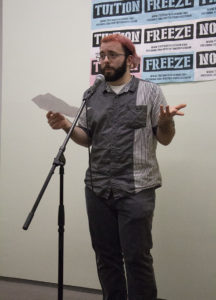 Last Thursday, students from local post-secondary schools were encouraged to attend an informational meeting about the campaign. SFU campaign organizer Giovanni HoSang said he wants to involve all public institutions even though they increase their tuition independently.

“Public education, as the name suggests, should be mostly publicly funded,” said HoSang.

Langara’s chair of the physics and astronomy department Bradley Hughes, who spoke at the SFU event, is head of the Langara International Socialists club.

According to RBC economic research published in June, tuition increases can be largely attributed to a lack of government funding.

Michael Koke, Langara’s director of financial services, said in an email statement that Langara has not raised international tuition for a “number of years.”

The SFU campaigners and their supporters will rally March 18 in preparation for the SFU board of governors’ meeting, March 21.