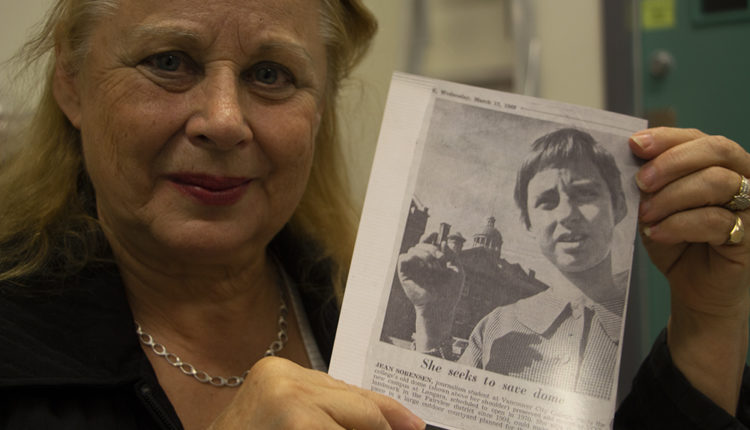 Jean Sorenson, a former journalism student at Langara College shows off a photo of herself taken in 1969. Photo by: Agazy Mengesha

As Langara celebrates its 49th year on 49th Ave. alumni and current students remember the past and look forward to the future of the college.

This year Langara is celebrating its 49th year on 49th Avenue. A pep rally was held at Langara’s gym on Wednesday celebrating “49 years on 49th Avenue”, an event which organizers promised to be one of the campus’ “biggest parties yet.”

Carly Barrett, a communications officer at Langara, said she wanted a unique twist to Langara’s anniversary party because an important part of the event was to celebrate the college’s community on 49th Avenue and its history.

“We know that a lot of colleges celebrate their 50th anniversary and I think that we wanted to try and be a little different,” said Barrett.

Before 49th Avenue, Langara was located at King Edward Centre, as part of Vancouver City College. But in 1969, the college made the decision to relocate. Jean Sorenson and Wyng Chao were former journalism students at the King Edward Centre during the time of the move.

Although they still consider themselves students of Vancouver City College and not Langara, they had fond memories of their college days. Chau reflected on his first few days at Langara when a teacher gave specific instruction on how to properly spell names.

According to Chau the teacher said, “The name’s Russell, two s’ and two l’s, and if you spell it wrong you fail immediately.” Meanwhile, Sorenson had what she described as a disastrous first day but a memorable year. “I had no idea what I was getting into,” Sorenson said.

“I thought I was in the wrong room ’cause there were all these typewriters and I didn’t want to be a secretary.” Sorenson turned things around when she met her classmates.

“Everybody started cracking jokes and just the camaraderie, the spirit of that first group was so wonderful,” she said.

In 1969, Sorenson led efforts to have the school’s bell tower preserved when the school was going to be demolished.

“I started this campaign, and we sent out press releases, I ended up on CBC, and on Bob Switzer’s television show and in the Vancouver Sun,” Sorenson said.

Unfortunately, the bell tower was destroyed in a fire soon after. Overall Sorenson said Langara had a good atmosphere.

“It was a smaller and more intimate atmosphere.”