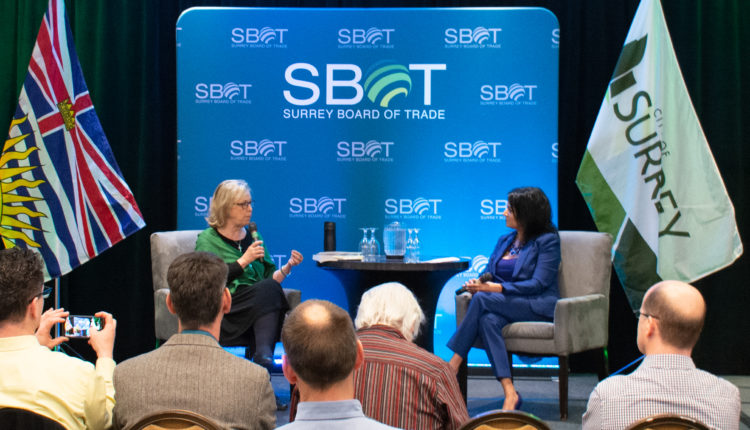 If elected, Elizabeth May says her party will rely less on fossil fuels

Federal Green Party Leader Elizabeth May promised, if elected, that her party would rely less on fossil fuels, and focus more on natural energy sources like solar panels in the city to increase municipal sustainability.

The public event featuring May was held by the Surrey Board of Trade on Tuesday ahead of the Oct. 21 federal election. The event’s purpose was for members of the community to voice their concerns about their community governments.

May said she wants to see “every roof [with] a solar panel” because it would create millions of jobs for the province. She said the installation of solar panels would start with larger businesses then work its way towards smaller, local businesses.

May said Canada would rely less on imports and exports, and focus more on locally produced products. She also  said this would render the Canadian economy less dependent on other countries.

Solar panels may not have a significant impact

“Over 30 years you would see a net positive return on your investment. A lot of people have a shorter time frame—they want to see pay back within five years,” Baxter said.

According to Baxter, a return within five years for businesses is unlikely because they pay lower energy rates in B.C.

Patrick Baylis, assistant professor at UBC, said the solar panel approach wouldn’t make a significant impact towards the CO2 emission crisis, and other environmental factors are also at play.

“[Solar panels] get us part of the way there, but it doesn’t on its own solve the problem,” Baylis said.