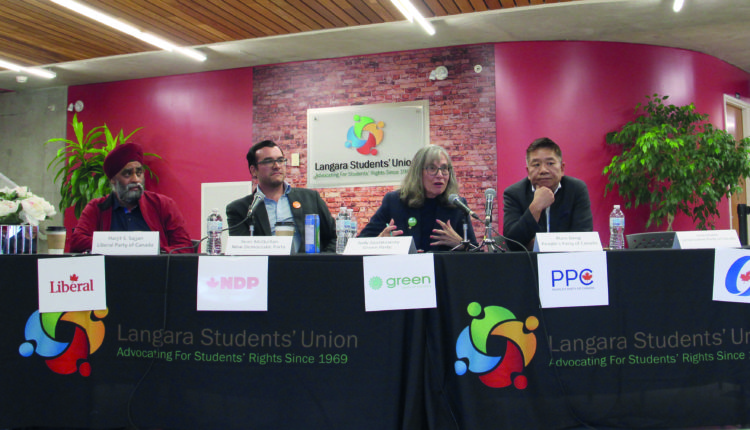 Free tuition can save students from the housing crisis, Green Party says

Free tuition is the key to solving Vancouver’s student housing crisis according to the Green Party candidate for Vancouver South, Judith Zaichkowsky.

Countries in Europe already offer free education to citizens and Zaichkowsky said Canada should do the same.

Education and income are related, Zaichkowsky said to an audience of students and faculty at Langara last week. She said she understands how unaffordable schooling is for post-secondary students.

“The Green Party has a platform to eliminate tuition for Canadian citizens,” said Zaichkowsky at an all-candidates forum at the Langara Students’ Union. “I used to work in Denmark where students not only got free tuition but also got paid to go to school. This is one of the happiest countries and the people there do quite well.”

“Student loans should become student grants and eventually working toward free tuition,” said McQuillan, a Langara graduate from the Studio 58 program who also spoke at the forum.

Both the Green and the NDP candidates say there needs to be changes in the everyday costs associated with being a student in Vancouver.

Student Pierna Malik, who shares an apartment near the campus with another Langara student, said she has few options because of the high cost of rent.

“My basement apartment is the best option because of the commute time,” she said. “I have to sacrifice other things to afford it.”

McQuillan said a major part of the NDP platform is reducing costs that are out of pocket, such as Pharmacare, dental and rent payments.

“For those who rent, there’s up to a $5,000 a year rental subsidy,” he said. “When you have that subsidy, your overall affordability to go to school is lower.”

The forum had candidates from four of the five parties attending. Besides the NDP and the Green Party candidates, the Liberal Party’s Harjit Sajjan and the People’s Party of Canada candidate Alain Deng also made their pitch to voters at Langara.

The Conservative candidate, Wai Young, did not attend.

Veganism made easy with beer