Canadians need to know the facts about concussions

Canadians remain ignorant about concussions and how they can ruin a person’s life, says an injury specialist at B.C. Children’s Hospital.

According to Dr. Shelina Babul, her most recent survey about concussions with 900 participants in September showed the need for more education on concussions.

“Only 11 per cent of British Columbians said they felt they were confident that they could recognize the concussions. What needs to be done is immediate recognition,” Babul said.

Returning to the sports field without proper treatment after suffering a concussion can lead to physical restrictions and impairment, Babul said.

“If someone sustains a concussion and it’s not recognized, then they continue to play in sports, they’re three times more likely to sustain a second concussion,” Babul said. She said the additional concussion can be more severe in nature and prolong the recovery.

Addis Atkinson, a Langara student who played on the soccer team, has suffered from three concussions. After her latest concussion, it took more than a month for her to recover. Because it was her third concussion, she and her family were aware of the steps to take. She said her symptoms included headaches, sensitivities to light and screens, not being able to read, dizziness and nausea.

“Any activity would make my head hurt,” said Atkinson. “I had to get cleared by my doctor before returning to play.”

Researchers assume that women take longer to recover from concussions and are more prone to suffer from one, said Babul. But they don’t know why.

“Researchers are still looking into … what are the factors that causes such a discrepancy between males and females,” Babul said. “There’s a lot of work being done on gender differences.”

Research yet to be done

Keith Yeates, chair at the Canadian Concussion Network, said during a recent national symposium on concussion in sport that it’s vital that every sports organization acts in concert when developing concussion protocols.

“Top goals are to promote innovative and collaborative research to improve the prevention, diagnosis, prediction of recovery,” Yeates said.

Being aware of the necessary steps to acknowledge misconceptions on recovery from  concussions are crucial as it impacts the recovery process. “The interesting part is 75 per cent of the 900 British Columbians did not know that too much rest can just delay concussion recovery,” Babul said. “There’s a real need to educate British Columbians and Canadians for that matter.” 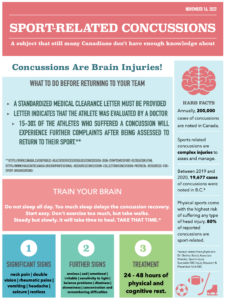 Some Marpole residents struggling with rapidly changing face of neighbourhood