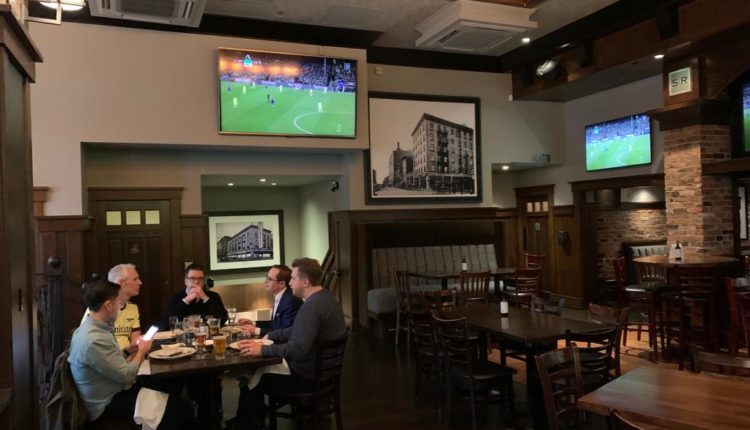 Patrons relax at the St. Regis Bar and grill in Vancouver while a game of soccer plays on the television in the background. Juan Ramirez: Photo

After 36 years, the Canadian men's soccer team is now back in action

Canadian soccer fans hope that Canada’s qualification for the World Cup in Qatar will boost the game in a country traditionally known for hockey.

The Canadian men’s team 4-0 win against Jamaica in Toronto on March 27 secured Canada’s spot in the biggest soccer tournament in the world. After 36 years Canada will participate in a men’s FIFA World Cup. The achievement comes less than a year after the women’s soccer team won a gold medal in the Olympics.

A historic feat for Canadian soccer

Peter Schaad, the marketing and communications officer from the British Columbia Soccer Association, said this is a unique moment for Canadian soccer.

“There has never been a time ever where women’s team has won a gold medal and just a little under a year later, the men have qualified at the top of their CONCACAF group,” said Schaad. “Also never in history will you have a team playing in two World Cups in three and a half years, just given how Qatar was in November, and then the 2026 World Cup will be in the traditional summertime.”

Schaad also hopes that this success would make people see Canada as more than just a hockey country on account of its long soccer history. He anticipates the recent success of the Canadian men’s team will motivate younger generations of Canadian soccer players to excel in the game.

“I just really hope that this inspires both boys and girls to just stay in the game and continue on their pathway,” said Schaad.

Excitement in the air

Milo Labonté, a bartender in St. Regis Bar and Grill in downtown Vancouver, said that when Canada is playing, there is a special feeling among the patrons.

“I’ve gotten the pleasure to watch some of the games during work and the atmosphere in the building whenever Canada is playing is electric,” said Labonté. “I feel like everyone’s getting behind it and I feel like it’s not only good for the sport, but it’s a good thing for the country that we’ve been able to make it this far.”

Despite the long time that it took for Canada to be back in a FIFA World Cup, Canadians are responding to the success of their national teams.

Natisha Singh, a SWAP worker at the Langara gym, said she is proud of the recent men’s soccer team achievement.

“I’m very proud as a Canadian citizen that they made it,” Singh said. “Personally, I watch soccer, but like not the small events as the big events. So, I’ll definitely be watching this to see if we can make it further.”

No signs of rise in addiction rates post-pot legalization