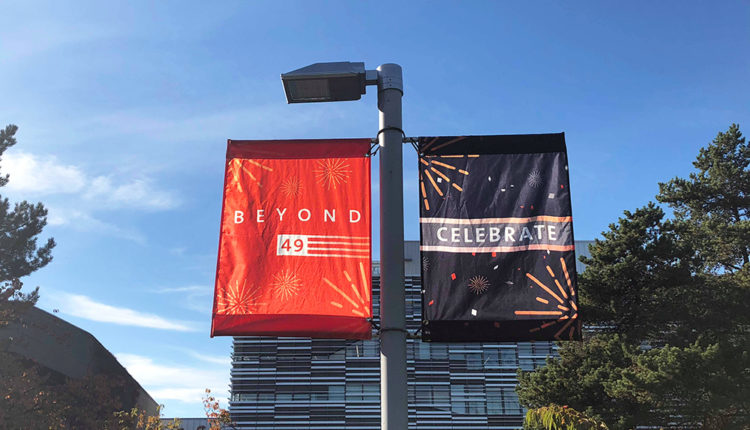 Beyond 49 banners around Langara College. Photo by: Cameron Thomson

Beyond 49 celebrations continue with honouring 49 of Langara’s alumni

Instead of the usual three alumni being celebrated at the alumni awards this year, 46 more will be recognized

For the first time Langara will celebrate 49 alumni at their annual awards, rather than their usual three.

To recognize the achievements of Langara College as a community, the college will celebrate the graduated students who’ve gone on to create impact within their careers and those still here working towards their achievements.

“It’s important for alumni to be involved in [their] school community,” Langara arts department alum Devin Braunagel, 23, said in an email.

“Not only is it a great learning opportunity for current students, but it’s also a chance for alumni to be mentors.”

As a part of the Beyond 49 celebrations, the communications services and college advancement departments are teaming up to create a special award program in replacement of this year’s annual alumni awards.

Past and present students, staff and community members, will be able to be nominated by either themselves or other parts of the initiative.

“Over the next eight months, we’ll be accepting nominations for 49 inspirational Langarans who have positively impacted the College, their field, or the community via the Beyond 49 website,” said Yvonne Ohara, a creator of the program, who is proud to help cultivate the growing network of past and present students.

“It’s going to be very difficult to choose only 49.”

Up and coming celebrations

Until the end of February, nominations will be open for anyone to recommend someone they think has made the biggest impact within the college or in society in general.

Selections will be made in March of next year, and their stories will be told from April to October.

The awards event itself will take place in November.

49 Langarans will replace the usual Outstanding Alumni Awards for this year only.

For anyone wanting to become more involved with Langara’s alumni network, there will also be a community day hosted at campus on June 15.

Organizer Carly Barrett said everyone is invited to the event, “The community day will be like an open house or a public festival.”

To commemorate Langara College’s move 49 years ago, students, teachers, alumni and Indigenous groups made the trek from Langara’s old home on King Edward street to 49th Ave. This video captures just some of the moments along the trek down memory lane.