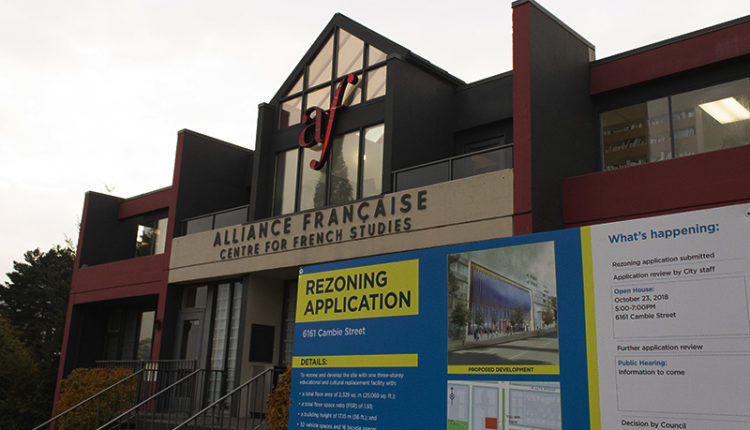 The Alliance Francais is in the middle of a zoning application for a new building. Photo by: Kathryn Tindale

Alliance Française, one of Vancouver’s oldest non-profit organizations, is advocating to rezone and rebuild their Cambie Street headquarters.

The city of Vancouver is reviewing the proposal under the Cambie Corridor Plan, but a decision might be a year away. “We hope they get a sense of what we’re doing, and what we bring to the community,” Hubert said.

Hubert believes the Alliance’s mission of supporting French language and culture benefits more than Vancouver’s network of French speakers. “The people that come to Alliance Française usually are non-French speakers, so it’s really having a point of exchange,” Hubert said.

Marie-Odile Marceau, architect of the potential redesign, hopes the new building will connect language communities while making a unique architectural statement. She says they’ll aim for spaces “as luminous and as feel-good as possible.”

Looking out to the future

The Alliance has operated at their Cambie Street location for 60 years. The building needs earthquake-proofing and expansions that would compromise the current parking lot. According to Bruno Gervès, a director on the board, rezoning is more cost-efficient than improving the current building.

“Do we spend millions to renovate what we have, which is too small, or do we rebuild?” Gervès asked at a rezoning open house.

Alexandre McCloud, an architect, describes the new building as a “cultural hub” for younger generations. The proposal will expand the learning space, McCloud said, and will also make a statement on the growing needs and presence of the French community.

Langara students board Lifebus to give back