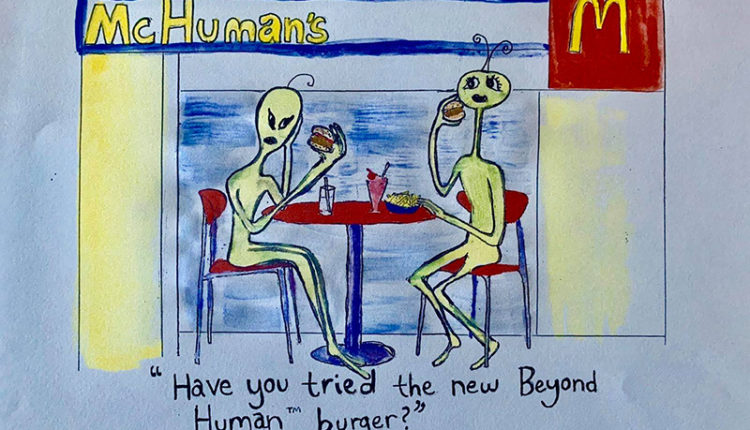 Plate Politics: Why you should eat less meat

The dinner table has always set the perfect stage for an argument. A group of too-familiar people, forced to face each other, held hostage by the meal before them. But only in recent years has the predictable ranting shifted to the politics of the plate.

The popularity of films like Super Size Me and Food, Inc. and books like Wheat Belly — and the controversy surrounding them — suggested that society-at-large was starting to deconstruct the relationship between the supermarket wonderland and the Mordor of food production.

But not much seemed to change. Phrases like “What can I do about it?” fit the self-assuaging bill.

And then there was Whole Foods.

But now we millennials face a new crisis: How do we reconcile the concurrent paradigms of peak wokeness and neoliberal nihilism? We have the knowledge to care about what we eat, but should we?

Absolutely. Unless it’s your personal mission to limit the livelihoods of present and future generations, you should immediately curb your dietary habits.

The best and simplest way to start: eat less meat. And while you’re at it, don’t ever buy animal products raised on factory farms.

That’s right, a diet with less or no meat not only promotes feelings of profound self-satisfaction but reduces environmental, social and personal harms.

Even a carnivorous nutritionist who believes in the circle of life told me it’s time for all of us to eat “way” less meat.

But with meat off the menu, surely you’ll shrivel into an emaciated husk.

Not according to Dieticians of Canada and the Academy of Nutrition and Dietetics, who agree that a vegan diet can be nourishing for any life stage.

In fact, studies show people who eat less or no meat greatly reduce the risk of heart disease, stroke, Type-2 diabetes and a variety of cancers. Red meat is among the worst offenders.

Though blindly trading your tube-steaks for tempeh isn’t the right approach either. The soy boom has devastated rainforests. Just like journalists, vegans should check their sources.

However, from an emissions standpoint, soy farming is a wheeze in a wind tunnel compared to the carbon hurricane of livestock production. Raising cattle pumps out almost 14 times more carbon dioxide than growing soy.

And if you’re unconvinced by the hippie hype, maybe consider how factory farming — which makes up 99 per cent of the global meat industry — impacts the people who gut thousands of animals every day.

The mental and physical fallout experienced by slaughterhouse workers is one of the saddest and least-reported stories of the industry.

There are a high rates of injury and forms of PTSD among workers, and many turn to substance abuse and violent behaviour as a result.

However, if you’ll excuse my tree-hugging, we only have one planet. And if we still trust scientists, we’re teetering on a tipping point of environmental oblivion.

What we need more than ever is knowledge: Whatever you decide to put on your dinner plate, be prepared to justify those choices to your co-diners and to yourself.