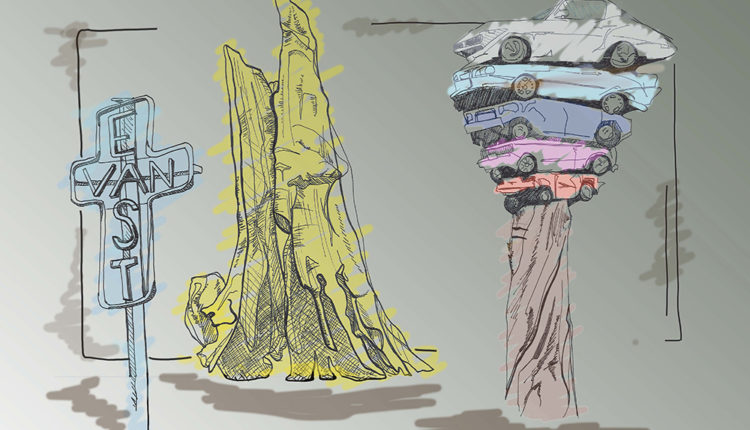 The sheer fact that public art can be a gamble with taxpayer money that could result in a pretentious pile of postmodernist crap irks many citizens without art degrees.

However, not as many complaints exist in Vancouver’s public art viewership. The difference often amounts to the impact a local artist can make.

The only way to make meaningful public art is to hire artists who live or lived in the area where the art will go.

Vancouver is home to many memorable installations: for example, the East Van cross at the VCC-Clark SkyTrain station, the giant golden hollowed tree at Marine and Cambie, the stack of cars at False Creek, and Bill Reid’s carving at YVR, which was depicted on the Canadian 20-dollar bill.

Artists born, raised, or who lived in B.C. all created these pieces, and they contribute to Vancouver’s atmosphere and attitude.

Art is from the heart

The artists’ personal experiences shine through all of these installations.

The East Van cross creator, Ken Lum, designed the monument to resemble those of the Catholic “greasers” from the rough-and-tumble East Van of the 60s.

Douglas Coupland, prolific Canadian artist and author, modelled the golden tree after a similar one in Stanley Park that had stood for 800 years.

Marcus Bowcott, who spent his career towing logs up False Creek, created the totem pole of cars to comment on throw-away culture.

Local artists use their experience to add to Vancouver’s landscape and make their work more meaningful to those who visit them. Public art should never become an ironic city attraction if a municipality wants to be taken seriously.